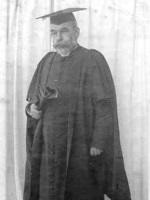 Among the records we hold for the parish of Headley in Hampshire are notebooks compiled by the Reverend Wallis Hay Laverty (1847-1928), rector of Headley between 1872 and 1928 (SHC ref HED/24/1-11). It has to be said that Laverty was not inspired by any great religious calling to become a clergyman. He was an Oxford don who had read mathematics but had the misfortune to fall in love and wanted to get married. At this time, fellows at Oxford could not marry so, instead, he took orders and was granted the living in the Hampshire village of Headley, then in the gift of Queen's College, Oxford.

The notebooks (along with all the Headley parish registers) are deposited at the Surrey History Centre. Although Headley is in Hampshire, it is part of the Diocese of Guildford, for which we are the appointed place of deposit for parish records.

While he may not have had a vocation for the church, Laverty's conscience ensured that he performed his ministerial duties meticulously, and his scientific background may have prompted his keeping detailed notes on his parishioners and residents in the village. The notebooks include newspaper cuttings, genealogical charts, copy letters and local observations along with scathing and admiring comments. In fact, his notebooks are the stuff that local historians and genealogists dream of, and a detailed study reveals a wonderful picture of nineteenth century agricultural village life.

Various villagers are described as "pretty and chatty" or "a drunken fellow". He remarks of one family "old man gets drunk at times, which son likes not" and of another, "woman nice but inclined to queerness in head, particularly at childbirth". My personal favourite description is "short man bought my carrots"! 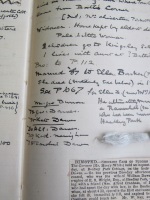 Laverty recites the misdeeds of his parishioners (occasionally in code, albeit not a terribly sophisticated one, for example, esjolt for drinks) but also their trials and tribulations. It would be easy to think of him as being fairly detached and uncaring but we see that he is fully aware of the economic problems besetting the nineteenth century community. Among his notes is a 'begging letter' dated March 1896 where he writes,

"Edward HILL, late of Bayfield's Farm, desires the kind help of neighbours and friends in providing him with a horse in place of the one which has just died. He is one of the many sufferers from the depression, and until better times must support himself by hire-carting, etc. Contributions may be given to the bearer or may be sent to me, and entered overleaf." 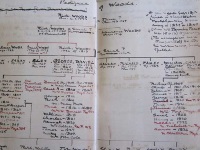 This is just one example of Laverty asking for his parishioners to rally round to assist those who have fallen on hard times by accident or similar.

However he is not a soft touch and, in a letter dated 17 Sept 1887 from the London and South West Railway seeking a character reference, he replies that the man's "…discharge was for drunkenness and insolence to his superiors. I regret I am not in a position to give a more favourable account of his character during his time here".

Learn more about the Laverty notebooks in this podcast by Jane Lewis.

The Laverty notebooks have been transcribed by an amazing team of volunteers for the Headley Society under the auspices of John Owen Smith so why not take a while to lose yourself in nineteenth century agricultural village life?