Surrey County Archaeological Unit (SCAU) is working with the National Trust on its Runnymede Explored Project (REx). The overall aim of the project is to enhance understanding and public accessibility of the areas it owns at Runnymede and Ankerwycke on either side of the Thames. The archaeological elements of the REx Project aim to encourage public engagement, provide training in archaeological techniques, and enhance our knowledge and understanding of the history and archaeology of the landscapes at Runnymede and Ankerwycke. 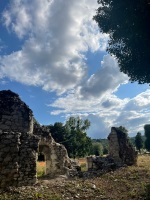 The Benedictine nunnery of Ankerwycke Priory was founded by Gilbert de Montfichet in around 1160 and was dissolved in 1536. The surviving standing remains and associated earthworks occupy the north bank of a loop of the River Thames. After its dissolution the Priory passed rapidly through various hands before being granted by the Crown in 1550 to Sir Thomas Smith who built an imposing house. There is very little contemporary evidence for the plan and exterior appearance of this house. The plan on the Wraysbury Enclosure map of 1800 is possibly the most useful guide, indicating its form as a hall house with projecting wings. 19th century statements confirm that the standing walls had formed part of the 'Old Hall' or mansion house, which was evidently formed by adapting the building range on one side of the monastic cloister. John Blagrove acquired the manor at the beginning of the 19th century and soon after demolished nearly all of the Tudor house in favour of a new one to the north. The remaining part of the house was kept as a picturesque ruin and possibly adapted to some extent within what became pleasure grounds.

The standing remains (see image of ruins) consist principally of parts of an east-west wall and a connected north-south wall at its east end. The south end of the latter clearly shows the removal of an east-west wall that previously abutted it and ran east, as well as the stub of an apparent angle buttress where the two walls met, which would suggest that both are external walls. Both standing walls include medieval window openings that make it clear that their respective north and east sides are internal limits to substantial rooms, and an internal offset for first floor timbers shows they were of two storeys.

An archaeological excavation was undertaken for two weeks in July and August 2022. The principal aim of the fieldwork was to establish the location of the Priory church and cloister which a geophysical survey had suggested lay to the north of the standing remains. The dig provided opportunities for community involvement with around 10 volunteers per day giving their time to learn archaeological techniques and reveal the features on this site. Many had not dug before and were taught the basics of troweling, recognising features and finds, and recording. 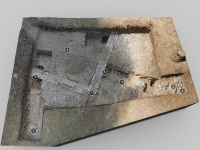 The post excavation work is now underway and these photographs (Trench 1 and Trench 2) show the layout of features and a summary of our initial thoughts. Select each image to view a larger version with numbered annotations. The images are taken from interactive 3D models prepared by David Fletcher and these can be viewed via SketchFab.

Trench 1 revealed the wall (1) that formed the north east corner of the cloister garth (4 – a central open area). The interior facing of the wall (8, 9) was built from stacked roof tiles. The wall was otherwise composed of chalk blocks (7) and to its north a parallel substantial chalk wall (2) must have been on the south side of the Priory church. The two were separated by the walkway (3) that provided access to all four sides of the cloister, the floor of which, probably composed of flagstones, had been removed, while to the east the chalk rubble dumped at demolition (5; it is very similar to that found north (6) and south of the church wall) almost certainly lies just west of the wall of the eastern cloistral range. In the deepest excavation, alluvium or river silt sits at the bottom (10) suggesting that the nunnery was built on river silt laid down by a flooding Thames. 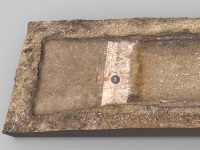 Trench 2 explored an area where geophysics had shown the presence of regular Tudor garden, with paths forming a cross. The garden was found to have been formed within a Tudor retaining wall (1, the dumped material (2) from careful demolition lies just to its east), whose coursing of English bond was exposed where originally it had been above ground (7), before relatively modern infilling (8), perhaps when the area was remodelled as part of Georgian pleasure grounds. The area within the garden had been considerably built up, using gravel for the paths (5) and soil (6) for the planting areas. At the base of the gravel a concentration of chalk and green sand blocks and mouldings (3), clearly derived from a nunnery building had been dumped. Sealed by the raised levels of the garden was the medieval ground surface (4) incorporating plentiful occupation material, notably bone, pottery and roof tile, but including fragments of patterned floor tiles (see floor tile image). Sampling of this suggested the layer had built up as flooding episodes added material and this explains why the Tudor garden was raised in level. 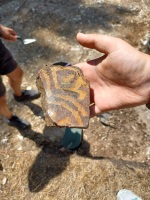