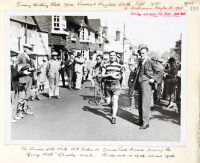 In this notable year for British sport, we are always keen to promote and develop our collections of records that celebrate the county's sporting heritage. Last year we accepted with great enthusiasm the records of a rather unusual organisation - The Centurions – a group with Surrey roots that had just celebrated 100 years of long-distance walking.

The collection (SHC ref 8923) includes signed minutes for 1911-1946 and 1959-1991, as well as 100-mile race reports and results for 1908-1987. A scrapbook covering a century of the group's events and activities includes these two inspiring images of W F Baker, victor of the London to Brighton walk in September 1928, and of walkers showing grim determination at the start of a less demanding 5-mile walk from Stamford Bridge the year before. 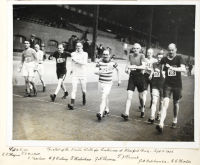 The Centurions group was founded at a meeting of long-distance walking enthusiasts held on 11 May 1911. The original requirement was that you had to 'be an amateur and have walked not less than 100 miles in 24 hours'. Several people had managed the feat before but the idea of timed long-distance walking had been popularised by the Surrey Walking Club who, in 1902, promoted the London to Brighton and Back time trial.

James Edwin Fowler-Dixon, deemed the best qualified person present, having walked his first 100 miles in 1877, was elected the first president of the new society and was made Centurion number '1'. Each Centurion received a number in the order they completed their qualifying walk, and are referred to in the minute books as 'brothers' and the 'brotherhood'.

Races were infrequent between 1912 and the Second World War, the major event being the London to Brighton and Back, only held once every 4 years. By 1939, 120 people had qualified as Centurions but, after 1946, 100 mile races and 24 hour walks became more frequent - at least one a year - so the membership increased.

Teams from other countries have taken part in the races, including the Netherlands, what was then Czechoslovakia and West Germany, and also Belgium and Canada. Women were allowed to become members in 1977, and by 2011 there were 1082 Centurions. A Dutch Centurion Club was established in 1966 and a British centurion who emigrated to Australia has set up the Australian Centurion Club.

The club continues to attract new members and, to celebrate its centenary, 'The Centurions, A History', was published by the group in May 2011.

More information can be found on the Centurions' website.