Taxpayers in Tandridge in 1334

In September 1334, Parliament agreed to the collection of a tax (known as a 'subsidy') to fund King Edward III's war against Scotland. Tax assessors appointed for Tandridge Hundred undertook to collect £51 10½d from its wealthier residents towards a total agreed for Surrey. Their loss is our gain: while our tax-paying 14th century predecessors were surely not pleased, 678 years later we can enjoy a rare and valuable record of the rural communities visited during the assessment.

The tax assessment which survives at Surrey History Centre is recorded on a roll of four long parchment membranes (SHC ref 2575/-) and covers the parishes of Lingfield, Horne, Bletchingley, Caterham, Warlingham, Chelsham, Farleigh, Tatsfield, Woldingham, Titsey, Oxted, Crowhurst, Tandridge and Godstone. In Latin, the clerk has noted the name of the property owner, the type of goods assessed and their valuation, total valued and the tax to be paid. The 'moveable goods' here are crops (including wheat, rye and oats) and livestock (including oxen, sheep, pregnant sheep, 2 year old sheep, milking stock, cattle and work horses). 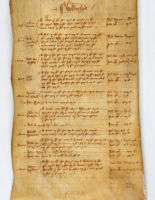 The poorest residents, subsisting with few animals, crops or other material goods, are excluded from the survey, but while it does not provide a complete picture of the inhabitants, it provides a remarkable level of detail about some, and the kind of farming they carried out in the area. The detail is fascinating and tantalising.

Alianora de Forre of Woldingham is the richest among a number of female property owners listed (assessed at around £85), owning in addition to wheat and rye crops, 2 oxen, 35 pregnant sheep, 35 hogs and 20 milking cows. She was a widow, able to manage her own estates or maybe use them to negotiate a new marriage. She is known to have acquired the manor of Nether Court, Woldingham, in 1337. Her poorer and obscurer neighbours include Sybil de Flore of Horne, assessed at 15 shillings, and Margaret Kitte of Crowhurst, assessed at 10 shillings (apparently the smallest valuation taxable).

The parish of Crowhurst lists three owners with the surname 'de Rugge'. John de Rugge and John de Rugge the elder must be father and son, each with goods valued at 60 shillings, crops and livestock apparently divided equally between them. Who might Richard de Rugge be, though, whose goods are valued at 105 shillings?

Three men with the surname 'le Parker' are listed: Adam, possessed of both crops and livestock (valued at £4 10s), Richard, who owns only livestock (30s), and Symon, whose goods amount to only 10s, not enough to be enumerated.

The taxmen themselves, William de Norkele, Nicholas ate Welle, Roger de Chelsham now Tandridge, Roger le French, William ate Looe and Roger le Begh, provide no details or valuation of their own goods, but assess their contributions as between 3 shillings and 6 shillings.