Suffragettes in Surrey: Walton-on-the-Hill’s Explosive Past 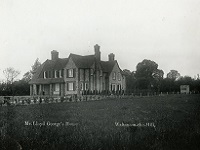 At 6.10am on 19 February 1913, a bomb exploded at the weekend retreat that was being built for the Chancellor of the Exchequer, David Lloyd George, next to Walton Heath golf course in Walton-on-the-Hill, causing damage estimated at £500 (nearly £55,000 in today's money). Militant tactics employed by the suffragettes were reaching their height at this time with widespread arson and window-smashing campaigns being carried out in the pursuit of votes for women.

Surrey History Centre holds the police report, compiled by Superintendent Henry Coleman, within the Surrey Constabulary records (SHC ref CC98/11/3), which includes witness statements relating to the bombing and a detailed account of the detainment of Emmeline Pankhurst following her arrest. The report elaborates on the nature of the bomb which was located in a back bedroom and comprised of 'French nails mixed with the powder'. There had apparently been two bombs but it was reported that the second did not explode, perhaps because the rush of air from the explosion had extinguished the candle of the second bomb. 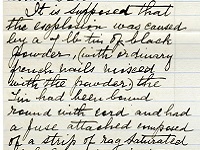 Details of the perpetrator were slowly established. The witness statements taken two days later all report a car arriving from the direction of London at about 4am to 4.20am, and then leaving half an hour later; one witness says that an earlier car had passed by at 1am. A further police report ultimately identified a car with the number plate P848Y reportedly driving through Banstead at 2.50am and returning at about 5am.

Lloyd George professed to support the suffrage cause but in February 1913 had refused to see a deputation to discuss the vote. On the evening of the bomb, Emmeline Pankhurst, one of the leading members of the Women's Social and Political Union (WSPU), claimed responsibility for it at a meeting at Cory Hall, Cardiff, where she reportedly admitted that they had 'blown up the Chancellor of the Exchequer's house'. Although Pankhurst was not directly involved with the bombing herself, she was willing to be arrested for the incident saying "I have advised, I have incited, I have conspired". 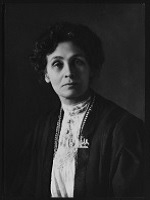 The police reports indicate an awareness of the high profile nature of the case and the status of Emmeline Pankhurst. Superintendent Henry Coleman wrote, "…it was the expressed wish of the Director of Public Prosecutions that Mrs Pankhurst when in custody should be treated with due consideration, as to her comfort, and for that reason I got Inspector Judgay to let her stay in his sitting room and to let her sleep in a bed in one of his bedrooms".

At her trial in April 1913 Emmeline Pankhurst was sentenced to three years' penal service for incitement and she would go on to hunger strike during her imprisonment at Holloway Prison. Although police suspected two WSPU members, Olive Hockin and Norah Smyth, the perpetrators were never caught.

With the outbreak of the First World War in 1914 the suffragettes ceased all militancy to concentrate on the war effort and demonstrate their patriotism. The Representation of the People Act was passed on 6 February 1918, granting women who were over the age of 30 and met a property qualification the right to vote in national elections. In 1928 the Equal Franchise Act extended this right to include all women and men over the age of 21 without property qualification.

Find out more about Surrey Heritage's project The March of the Women: Surrey's Road to the Vote and follow the project blog

March of the Women: Surrey's Road to the Vote