South Asian influences can be found everywhere in Britain. From our food and clothes to our music and even our words, its culture permeates all parts of British life and adds to the wonderful diversity of our nation. The streets of our towns and cities carry the colours, sights and sounds of proud South Asian identity and are richer for it. Celebrating South Asian Heritage Month (18 July to 17 August) provides an opportunity for us to discover British South Asian history through education, arts, culture and commemoration.

The campaign theme this year is 'Journeys of Empire'. Whilst long-established trading relationships of the British Empire led South Asian people to settle in Britain from the 1600s onwards, two 20th century anniversaries are being especially highlighted this year: the 75th anniversary of the Independence of India, Partition, and the creation of East and West Pakistan, and the 50th anniversary of the expulsion of Ugandan Asians by dictator Idi Amin. Pivotal events such as these led many South Asian families to start a new life in the UK, and the collections at Surrey History Centre can shed some light on how these people connected with Surrey and made their own unique contributions to the county. Their stories help us better understand the diversity of Surrey today and how it has benefited from their social, economic and cultural inputs. In this Marvel we celebrate three very different South Asian journeys of Empire and their connections with Surrey.

Gulzar Waljee - from Tanzania to Guildford, helping build the NHS 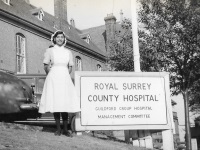 After the Second World War, staffing Britain's fledgling National Health Service (NHS) was made extremely difficult by national labour shortages. From the 1940s onwards, thousands of young men and women came from India, Pakistan and other South Asian communities answering the call to help ease this crisis and help build a new and free health care system for all. One of these was Gulzar Waljee (née Shivji), a young woman of Gujarati ethnicity, who in April 1959 arrived in London from a small town in Tanzania (then Tanganyika) as part of a British Council-funded opportunity to train as a nurse and midwife. In the late 1890s Gulzar's father had moved from the Kutch district of Gujarat, in western India, to East Africa as part of the British Ugandan railway construction workforce.

At Heathrow Airport, Gulzar was met by representatives from the British Council and put on a train to Guildford where the hospital matron was expecting her. She recalls, "Well, I thought, how will I ever know where to get off? I felt so lonely in the train." Once at the Royal Surrey County Hospital in Guildford, Gulzar completed three months compulsory Primary Training at nursing school before being permitted to work on the hospital wards. The shifts were exhausting and at first she was challenged by her lack of spoken English, for which she recalls earned her a lot of 'telling-off': "I often stood in the sluice crying but there was no question of going back to Tanga. My elder brother, Abdul, had warned me not to come back as other members of our family's future lay on my hands." There was a huge weight of responsibility for making a success of her training. Many student nurses could not make the transition to a new life here and returned home without their completed qualification.

Gulzar continued to work hard, her English improved, and she enjoyed her three years living in Guildford. On her days off she took the bus to places like Milford and Godalming, and she fondly remembers the river, station and theatre; she even learned ballroom dancing. Racism and discrimination were the experiences of many health workers migrating to the UK, especially when it came to training and career progression. In Surrey, Gulzar recalls however that she "never felt not wanted or discriminated [against]" and the patients on the wards loved her. Ahead of her exams Gulzar knew that she couldn't jeopardise the futures of student nurses from her homeland. She recalls, "Our Matron was from South Africa. South Africa was not liberated by then, 1961. I went to Matron's office. She said, 'Miss Shivji, I had two girls from Tanganyika before you and they both failed their final exam. If you fail, I will stop taking girls from Tanganyika.'"

Gulzar passed her exams and left Guildford to study midwifery, firstly at North Middlesex Hospital, and then at St Mary's Hospital, Croydon. By the age of 23, she was a State Registered Nurse and a State Registered Midwife and had a 30-year career, much of it working in the National Health Service.

(With thanks to Gulzar Waljee, her daughter, Yasmin Waljee OBE, and to the Migration Museum who tell the story of immigrant nurses in their 'Heart of the Nation' exhibition. Learn more about Gulzar's story which has become part of our archive collection for posterity (see SHC ref Z/748). 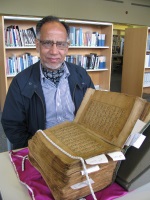 Woking is home to a large Pakistani/Kashmiri community, the majority of which originates from Mirpur in the state of Kashmir, Pakistan, where in the 1960s, land was requisitioned from landowners for the building of a hydro-electric dam at Mangla as a joint venture between British and Italian companies. As part of compensation for losing their land, one member of every family was granted passage to England. With chronic labour shortages in the UK escalating in the late 1960s, further members of the families were granted passage as a solution to the crisis. Families continued to immigrate over the next two decades.

Mohammad Ilyas Raja's family lived in Fatehpur, Mirpur, and already had ties with Britain. Mohammad's father, Major Raja Alaf Khan (1895-1981), had proudly served with the 1st Punjab Regiment during the First and Second World Wars. Mohammad trained and worked as a lawyer in Mirpur but came to the UK and settled in Woking in 1984. He soon became a driving force behind the organisation of the Pakistani/Kashmiri and Muslim community and cultural events within Surrey's most multi-cultural town. A longstanding member of the Labour Party, Mohammad also became Woking's first non-white elected Borough councillor, for Central, Maybury and Sheerwater Ward in 1996, and still serves this ward (now Canalside). He has become a prominent member of the Woking Pakistani/Kashmiri Community, maintaining strong social, religious, cultural, political and business links with those areas.

Conscious of the need to document the contribution of the Kashmiri/Pakistani community in Surrey, Mohammad began placing his papers documenting his career and family life with Surrey History Centre in 2005 (SHC ref Z/454). Among the papers is his family's ancient eighteenth century manuscript Qur'an, handed down through the generations. The Qur'an is unique; written on indigenous paper probably from the Kashmir region and in Nashki Arabic text (from which modern Arabic script style developed). Mohammad is an Elder of the Shah Jahan Mosque in Woking, and this volume is revered by the local Muslim community, so we proudly display it at our open days. Out of respect the volume is archivally packaged in non-animal derived materials, made specially by our conservator, and is securely cared for in our strongroom.

More about the papers of Cllr Mohamad Ilyas Raja can be found on our Exploring Surrey's Past website. 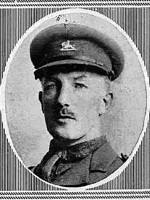 One more unusual Surrey connection with South Asia has recently been discovered as part of our Surrey in the Great War project and demonstrates both the role we play in linking up research from across the globe but also in ensuring that diverse stories are widely accessible and preserved.

Prior to the First World War, Philip Pipon Braithwaite played football for the Corinthian-Casuals Football Club in Chessington, then part of Surrey. However, it was Braithwaite's life in India that Mr C.K. Ramachandran of Calicut Heritage Forum contacted us about, providing an important South Asian research link which we were completely unaware of. Braithwaite was Inspector of Schools of the 8th Educational Circle comprising what is now the northern area of Kerala and the southern areas of the Karnataka states. Pre-Partition, he was well-known as the author of the English Primer which was taught in English Schools there.

Not all stories of colonialism have a positive outcome but Mr Ramachandran tells us that Braithwaite, who was based in Kannur, was 'an inquisitive and sympathetic soul' and fully embraced the local culture there. So great was his quest for indigenous cultural knowledge that, in 1910, the Raja of Kollengode sent him Pandit P. Gopalan Nair (1869-1968), a Malayalam/Sanskrit guru, so he could learn the local Malayalam language. Braithwaite insisted Nair also taught him Sanskrit (the classical Indian language in which all the scriptures are written), along with a grounding in Hindu scriptures, particularly the Bhagavad Gita. The friendship forged between the men during this period continued until Braithwaite's tragic and untimely death in Palestine in September 1918, whilst serving in the Indian Army, just a few weeks before the Armistice. Nair described Braithwaite as 'a perfect friend, model disciple and the embodiment of gratitude'; Braithwaite said of Nair, 'While I am second to none in my respect towards my guru, I have been a worthless disciple'. Braithwaite is memorialised in Haifa War Cemetery. Read more about his story on our Surrey in the Great War website.

If you have stories or material documenting the South Asian contribution to life in Surrey, we'd be delighted to hear from you.

On our Exploring Surrey's Past website you can find out more about the South Asian community in our collections, including papers of the Shah Jahan Mosque in Woking, South Asian Muslim communities, and Gurkhas.