Romance and red tape: the Lovelace marriage settlement of 1835 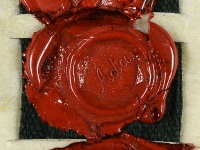 Lengths of red tape were needed to secure this love match. The couple were William Lord King (1805-1893) of Ockham Park, later to become the 1st Earl of Lovelace, and Augusta Ada Byron (1815-1852), daughter of the poet George, Lord Byron, and now best known as Ada Lovelace, the mathematician and computer pioneer. Anticipating their approaching wedding, William wrote of "such happiness …too excessive to be enjoyed otherwise than in a dream", while their lawyers negotiated to join vast landed estates in five counties.

Marriage settlements were conveyances to trustees, which provided for income during the couple's lifetime and for the succession of their estates through subsequent generations of the family, covering all the contingencies of death, survival and inheritance. Here the situation was complex. For William, previous trusts had to be unravelled before enacting his settlement. Ada, on the other hand, had been made a ward of Chancery as a baby to protect her from any claim her 'mad, bad and dangerous to know' father might make, so the marriage required the court's approval. 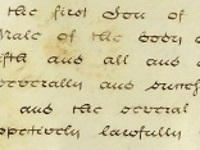 These two deeds are just the main conveyances establishing the settlement, weighing together some 7lb 7oz (3.7kg). A further ten deeds were required before and after the marriage to secure the title fully. The King estates, more than 9000 acres in Surrey, Somerset, Devon and Dorset, would support the couple in their married life (about 200 tenant farms and houses would pay rent). Ada brought £30,000 in dowry and the prospect of the future inheritance (or 'reversion') of her mother's right to the Barony of Wentworth and its Leicestershire lands. Ada would receive 'pin money' (the married woman's pocket money) from both King and Wentworth estates amounting to £600 per annum

The marriage took place on the 8 July 1835. Over the next 18 years three children were born: Byron, Annabella and Ralph, the heirs for whom they had so carefully planned. The settlement was of course no security against misfortune, indeed its dispassionate clauses allowed the possibility of various unhappy circumstances such as childlessness and early death. 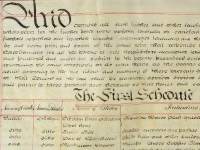 In 1843, Ada published her 'Notes' on her friend Charles Babbage's idea for an 'analytical engine' (proto-computer), writing what is perhaps the first computer algorithm, and positing the universal potential of a numerical calculator where the computing of numbers could be employed to represent abstract concepts. Despite this achievement, Ada led a troubled life and died aged only 37 on the 27 November 1852, having spent in her last years far more than her allowance on the obsessive development of a gambling system. 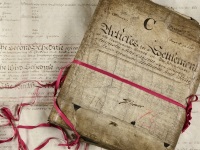 It was William who, under a convolution of the marriage settlement, inherited from his mother in law the Wentworth estates Ada never owned, and adopted his wife's maternal ancestors' name Noel in acknowledgement. William survived both his wife and his eldest son and lived until his late 80s. His Surrey home, Horsley Towers, bears his signature architectural design feature of mixed brickwork and flint, along with many other structures in East Horsley. His youngest child Ralph finally inherited the Lovelace estates in 1893.