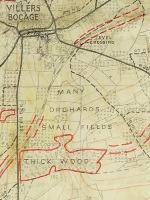 It was at 10am on 6 June 1944 that the BBC Home Service presenter, John Snagge, announced these immortal words:

"D-Day has come. Early this morning the Allies began the assault on the north-western face of Hitler's European fortress. The first official news came just after half-past nine, when Supreme Headquarters of the Allied Expeditionary Force issued Communiqué Number One ... This said: 'Under the command of General Eisenhower, allied naval forces, supported by strong air forces, began landing allied armies this morning on the northern coast of France'".

The Normandy beaches were divided into five sectors: the British landed at Gold and Sword, the Canadians at Juno and the Americans at Utah and Omaha.

However, D-Day was just the beginning. The Allies not only needed to reinforce the bridgehead established on the first day, but to break out into France itself. Among these reinforcements was the 131st (Queen's) Brigade, which was composed of the 1/5th, 1/6th and 1/7th Battalions, Queen's Royal (West Surrey) Regiment. The Brigade was stationed in Essex and embarked at Southend on 6 June. According to the War Diary of the 1/5th Battalion, "slight enemy shell fire was encountered causing no damage, escort laying an effective smoke screen" (SHC ref QRWS/9/4/1). This shell fire probably came from the Pas de Calais, which had been heavily fortified since the Germans believed the invasion would be there rather than Normandy. 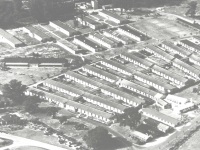 It was not until 8 June (D-Day +2) that the 131st Brigade finally landed in Normandy, (SHC ref QRWS/9/4/1). However, even before D-Day, Surrey had been involved in the build up with the South Eastern Army Command Headquarters at Reigate. Bernard Montgomery, who was to command 'Operation Overlord', gave a speech to the troops at Albury Heath in May 1944. Canadian troops were also camped at Witley, Thursley, Elstead, Haslemere and Gomshall. Roads, including the A3, became a large car park for army vehicles ready to be driven to Portsmouth, while fighters from RAF Horne were among the 13,000 aircraft which supported the landings.

The wounded were brought back to Southampton, Gosport or Portsmouth, from where they were transported by train to the nearest, 'transit hospital'. These included Botley's War Hospital at Chertsey (now St Peters Hospital), Horton War Hospital at Epsom, and Leatherhead and Sutton Emergency Hospitals. At the transit hospitals, casualties were treated and then transferred to other hospitals. Between D-Day and 1 November 1944, 70 convoys transported wounded soldiers from Woking Station to Botley's War Hospital (SHC ref 8003/1/1). 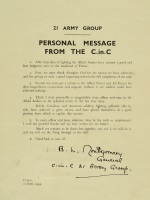 It was not until 8 May 1945 that the war finally ended in Europe.