Ockenden International: the remarkable story of a Surrey refugee charity 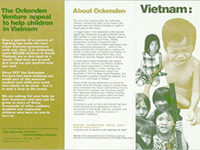 At the end of the Second World War, hundreds of thousands of people from all over Europe were left homeless and without status. In 1951, in Woking, three schoolteachers – Joyce Pearce, Margaret Dixon and Ruth Hicks - decided to provide a better future for children living in the many displaced persons' camps across Germany, and so the Ockenden Venture was established. From small beginnings with the arrival of groups of children in Woking in 1952, Ockenden rapidly expanded to provide refugee aid both in Britain and overseas - establishing schools for Tibetan refugees in India, sponsoring the education of black South African students, and bringing Biafran refugees to Britain. It also established many educational and vocational centres for refugees in Sudan, Pakistan, Thailand and Cambodia. But Ockenden is probably best known for its major role in the resettlement in Britain of Vietnamese boat people in the 1970s and 1980s. For over half a century, the charity provided shelter, training, education and hope for thousands of refugees across the world.

In 2008, Surrey Heritage and the Woking Community Play Association were jointly awarded a Heritage Lottery Fund grant to preserve Ockenden's history and celebrate its legacy. The project involved the cataloguing of over 100 boxes of records, the involvement of volunteers to source material, and the recording of memories of people who worked for, or were helped by the charity. These helped to form the basis of a community drama, 'The Vision', which celebrated Ockenden's inspiring story and was performed at Winston Churchill School in Woking in April 2010.

The archive of Ockenden was a major acquisition for Surrey Heritage. The records were taken from the attic of the charity's offices in Woking and include film footage, annual reports and publicity material, papers of the founding members, personal files and a photographic archive. These chronicle in detail the development of policy, life of the refugees and staff in the Ockenden houses in Woking, Haslemere and elsewhere, as well as its overseas projects in Asia, the Middle East and northern Africa.

The archive catalogue was completed in 2010, and a copy is available online, along with some images from the archive on the Exploring Surrey's Past website. The 40 reels of historic film footage of Ockenden and refugee documentaries were digitised by Screen Archive South East (SASE) and preserved for the future. The charity's records, including the film footage, can be consulted at Surrey History Centre, although sensitive material is subject to access restrictions. Importantly, the archive is a valuable source for the study of the reception of refugees into the United Kingdom from the 1950s to the 1980s.

The project has attracted much interest. There have been newspaper articles, radio and TV coverage, and we have been contacted by many people associated with the Ockenden – whether as children helped by the charity or former staff members. Many of the issues dealt with by Ockenden are still relevant today, more than 50 years after the first World Refugee Year was commemorated in 1959. Nowadays, Ockenden International operates purely as a funding agency, offering prizes to projects that aid refugees or displaced people in the UK and overseas. It also funds the Joyce Pearce refugee studies fellowship at Oxford University's Lady Margaret Hall. Details of Ockenden International's work today can be found online at Ockenden International.

Learn more about Ockenden's role in the reception and resettlement of Vietnamese refugees in the UK via YouTube.