A Medieval Ampulla from The American School in Switzerland, Thorpe 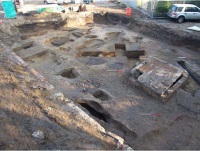 In 2008, an archaeological excavation was carried out at TASIS (The American School in Switzerland), Thorpe, Surrey. The site contained intercutting pits, wells and waterholes, and boundary ditches. These features revealed a history of domestic occupation within the village from the late Saxon period onwards. Also uncovered was a portion of medieval road, The King's Highway, the position of which was previously a matter of speculation based on cartographic sources. The site was the first in Thorpe to reveal the development of the medieval village, and gives a rare insight into the growth of such villages within Surrey.

During the excavations, a number of interesting finds emerged. A gently sloping pit in the centre of the site was found to contain an ampulla alongside pottery dating from the 13th to 15th century. Ampullae were popular religious souvenirs for pilgrims in medieval England. They were small lead containers that held holy water from religious sites. Holy water was thought to have special qualities, and lead ampullae were produced in vast numbers (Lewis 2014). Over 1,400 examples have been recorded by the Portable Antiquities Scheme to date. 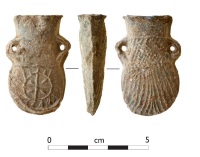 The ampulla from TASIS is a standard scallop-shell shape, with scallop decoration cast on one side. It is thought that this form originates from the symbol that was first associated with St James and the pilgrimage to his shrine at Santiago de Compostela in Spain. The outer side of an ampulla typically depicts a motif linking the contents of the bottle to the shrine or holy place that it came from and The TASIS ampulla has a circle divided into 4 sections containing a dash in each. Although we don't know where this ampulla originated, a parallel has been found in Somerset dating to c.1150-1350. The Somerset ampulla seems to have been made using the same mould, and therefore perhaps was bought from the same religious site as the TASIS ampulla.

The loops on ampullae were used to thread a cord or chain so it could be hung around the neck or suspended, perhaps in a barn with livestock or in a house (Spencer 1990). However, this ampulla appears to have been carefully unfolded and opened. Some suggest that holy water from pilgrimages may have been poured into the ground before throwing the ampulla onto the field to help bring a good harvest, but others think the contents may have been drunk for their healing properties (Anderson 2010, Lewis 2014). We may never know exactly how this ampulla was used, but it gives us a precious insight into medieval life in Thorpe.

Anderson, W. 2010, Blessing in the Fields? A Study of Late-medieval Ampullae from England and Wales