For Black History Month, independent scholar and writer, Dr Jill D Snider, reveals the inspiring life of a Black American who became a leading industrialist in Camberley and whose inventions played an important part in the British war effort.

As he stepped aboard the SS Majestic in New York harbour in late May 1931, bound for England, Lucean Arthur Headen looked ahead with excitement and apprehension to a long sea journey and an unknown future. The almost 52 year-old inventor and entrepreneur was long past the age when many would have risked financial stability for a dream, but Headen had never seen the value in a conventional life. A child of former slaves in Carthage, North Carolina, he had aspired since his earliest years to be an inventor, and his passion had already carried him on some impressive journeys. 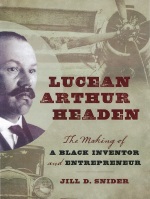 One of the first Black Americans to take to the air, Headen learned to fly at Mineola, Long Island, in 1911, eager to test an aeronautical stabilizer he had developed. In World War I he demonstrated to the U.S. and British navies an optical camouflage method to prevent 'submarine chasers' (sent to destroy German U-boats) from being detected. Teaching himself automotive engineering in the early 1920s, he started a company in Chicago to manufacture his 'Headen Pace Setter' and 'Headen Six' cars, and in mid-decade steered a 'Headen Special' racer at breakneck speeds around dirt tracks from Chicago to New York to Savannah. He then united fellow auto enthusiasts across the country into the first national African American auto-racing association.

Headen took his inspiration from his creative forebears, who instilled in him a love of mechanics and a spirit of enterprise. His grandfather had been a highly regarded wheelwright for a buggy company, his father the owner of a prosperous sawmill, and his great-uncle a noted toolmaker. The artisanal community of which they were a part provided Headen with an education and the critical support he needed to navigate the dual challenges of racial segregation and a changing inventive landscape.

By 1930 Headen, with inventor Henry Petit, acquired his first patent for a new ignition method that provided multiple sparking points for fuel within an engine's cylinder. The new 'Headen-Petit spark ignition' system made it easier to use plentiful, cheap crude oil in automobiles and lorries designed to run on petrol. That same year Headen applied for a solo patent on a related design - this one for a device that turned thick crude oil into a fine, dry vapour, increasing its combustibility. Hopes of marketing his 'vaporising manifold' abroad were what had brought Headen aboard the Majestic. As the steamer pulled free of the dock, and Headen scanned the vast waters ahead of him, he was anticipating the particulars of a scheduled test of his invention by the Royal Automobile Club. 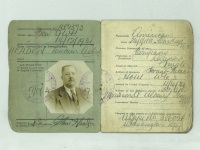 The outcome of that test changed Headen's life, and turned a temporary business trip into a permanent residence. Over the next twenty-six years, he realised his dream in Britain, eventually receiving a total of eleven patents. Most were related to improving the efficiency with which vehicles could burn crude oil. Others reflected his eclectic interests, and included anti-icing methods for aircraft, a replaceable plough tip that tripled the life of a share, and raingear for cyclists.

Headen chose Surrey to manufacture his inventions. Following his demonstration to the Royal Automobile Club, he established Headen Hamilton Engineering Ltd with George Hamilton, a Sunderland native then living in the United States. With an office on The Strand, London, they manufactured their first product - an engine converter kit - in a factory off Victoria Avenue in Camberley.

Renaming his firm Headen Keil Engineering Ltd, in 1934, when builder James Richard McLean Keil replaced Hamilton as his partner, Headen went on to design specialty gaskets and carburettors distributed across the British Commonwealth. By 1937, according to the Camberley News, he had become one of four local leaders responsible for the industrial development of Camberley, and his wares were spreading the town's name 'far and wide.' 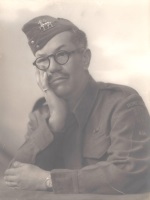 World War II also gave Headen's products new importance. To conserve petrol for military use, in 1939 Aveling-Barford of Lincolnshire began offering his converter kit to owners of its commercial vehicles and dumpers. More important, after petrol was rationed, farmers across the United Kingdom snapped up the kit from their local garage or farm supply store to install on their tractors. The Royal Air Force, too, may have relied on an 'antidilution' gasket Headen designed to protect engines from damage caused by unburned fuel. The RAF purchased a lot of tractors from Roadless Traction in 1936, when the company was fitting machines with the gasket, and following the outbreak of war, they pressed these into service to clear and mow airfields.

Headen's contribution to the war effort was also personal. In September 1940 he offered his services to the Camberley regiment of the Surrey Home Guard's 1st Battalion. One of only a small number of Americans to serve in the Guard, Headen never gave up his American citizenship, but the war forged an unbreakable bond between him and his wartime neighbours. His emotional life, too, planted deep roots in Surrey. At war's end, he wed Gladys Hollamby of Frimley Green, and moved to the village to be near her family. Three years later the couple adopted a child, proudly naming him Lucean Arthur Headen Jr. 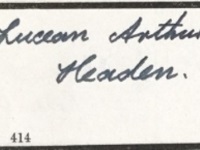 Tragically in 1957, just after his son turned nine, Headen suffered a sudden heart attack, bringing his remarkable journey to an end. Thus the next time you find yourself in Frimley, take time to stroll through the churchyard of St. Peter's, where Headen lies, and think of the man the 'Camberley News' eulogised as "An American Who Settled in Frimley Green." And think, too, of all those who made his dream possible.

For Black History Month 2020, listen to an interview with Dr Snider about the life of Lucean Arthur Headen.

Read the full story on Exploring Surrey's Past.