We were visited in January 2014 by Mr Allan Mornement of Ashtead whose father, Major Peter Henry 'Skipper' Mornement, served with the East Surrey Regiment and sadly died from wounds sustained after being hit during an attack in Northern Italy in April 1944.

The records relating to Mornement, held at Surrey History Centre as part of the personal papers of the East Surrey Regiment (SHC ref ESR/25/MORN/-), include a copy of the diary kept by Mornement's wife of the voyage of the SS Maréchal Joffre from Shanghai to Marseilles, 22 Mar 1940-23 Apr 1940; transcripts of letters from Mornement to his wife concerning his service in North Africa with the 1/6th Battalion and the landing at Anzio with the North Staffordshire Regiment, 1943-1944; and a copy of a portrait photograph of Mornement in uniform, 1944.

Allan Mornement himself notes in his introduction to the transcripts of his father's letters that 'I do not believe that my father had any aspirations of being a diarist or an author. He certainly did not appear to keep any written record of what he did prior to 1943, but at this point he decided to do so, and my mother began to receive individual type-written chapters relating his experiences in North Africa'.

This may have indeed been the case but Mornement's letters are very well written and provide a vivid account of his experiences to the point that you can almost imagine that you were there. The chapters describing his experiences are also interspersed with extracts from his letters to his wife (as put together by their son) and these are especially poignant. 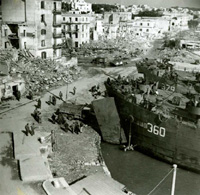 After landing in Anzio in December 1943, Mornement's letters to his wife seem reasonably upbeat, one on 2 December telling her not to worry about his new location and that he 'might have arrived at a much worse time, and one day we might be proud of the fact that I have been in both the I and VIII Armies' and one on 5 February 1944 saying that he is very well and 'as full of optimism as ever' despite the cold and windy weather and the trenches being flooded with ankle-deep mud.

However, on the night of the 8/9 February 1944, Mornement's company (at that time he was in command of 'C' Company) was overrun by the German 145th Grenadier Regiment. A letter from Lt Col A J Snodgrass to Major Mornement's father dated 7 March 1944 explains that his son has been injured, was moved to a cave for shelter and has since been reported missing. 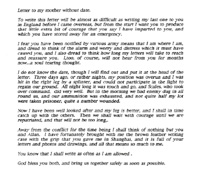 Mornement's last undated letter to his wife, which he wrote from the Prisoner of War hospital in Mantova where he subsequently died and was never sent but returned to his wife with his effects after the war, is incredibly poignant. In it, he does all he can to reassure his wife that he is being well looked after and that his leg is healing and that he will 'in time catch up with the others'. He adds that, while he is away from the conflict, all he shall think of is his wife and Allan and that the letters, photographs and drawings from his wife that he fortunately brought with him mean so much to him. He ends his letter 'God bless you both, and bring us together safely as soon as possible'.