Joseph Brooker, a Merrow farmer, and his 'Poor Robin Almanack' for 1689

'Poor Robin Almanack', Observations on December, 1689: '…This month is much employment for cooks, who are entitled monarchs of the marrow bone, marquesses of the mutton, lords high regents of the spit and kettle, barons of the gridiron and sole commanders of the frying pan... People may stir up the fire, yet though the days be cold, the nights are warm enough, god-a-mercy good ruggs and kind she bed fellows.'

The owner of this 'Poor Robin Almanack' was Joseph Brooker, herein provided with practical information such as the 1689 calendar, and a table of interest at 6%, as well as entertained by astrological data, satirical jibes and serious and facetious wisdom, much at the expense of puritans and women.

In 1689, Brooker of Great Goodwin Farm was a successful, well-respected parishioner of Merrow, with around 200 acres in hand. High constable of the hundred of Woking, and chief gamekeeper to his near neighbours the Onslows of Clandon (whom he supported in elections), he also acted as churchwarden and overseer of the poor. 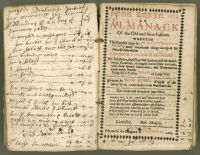 The almanack comprises printed pages, interleaved with blank sheets for the owner's use. Joseph's phonetically spelt entries are a jumble of personal and official financial accounts with copies of medicinal recipes and timber calculations. We learn of the expenses of Joseph's eldest son Thomas's schooling with Mr Baker, and the times 'hee stayed a tome' (stayed at home), the days worked for Joseph by neighbours and their servants at harvest, receipts from the Onslows for loads of wheat, barley and straw, and Joseph's payment of taxes. Joseph's responsibilities for the parish included many payments made to 'passengers', apparently vagrants, paid a penny to move on (let us hope he never heeded Poor Robin's advice for the parish watch, 'any person that walks the streets too late...commit him to prison and then ask him whither he was going'). He also made payments for the house of correction, church maintenance, books, bread and wine.

Joseph died in 1713, leaving among his personal bequests to his wife Elizabeth that staple of family firesides, Foxe's Book of Martyrs. We can only guess how much attention he paid to the published contents of his bizarre notebook, or how much he shared its rough humour, but his almanack is a cherished survival from this thriving period of his life, among an archive of over 100 documents of the Merrow Brookers, now recently returned to Surrey from South Africa.