Two of the earliest printed maps in our collection are the county maps of Surrey and Middlesex by John Norden. Both are very fine examples dating from c.1610 and were produced for inclusion in the first English language edition of Camden's Britannia. The Surrey map is the earliest individual map of the county and was made from a survey undertaken by Norden in the early 1590s. In the local government reorganisation of 1968 the borough of Spelthorne was transferred from Middlesex to Surrey and for this reason we hold historical maps of both counties in our collection.

John Norden was born in 1548, the son of a Somerset yeoman. He graduated from Hart Hall, Oxford, and began his career as a lawyer involved in land tenure and surveying for the local gentry, before moving to London and becoming an attorney. He was a staunch Protestant and successfully published a selection of devotional books, including The Pathway to Penitence and A Pensive Man's Practice which ran to several editions. In London his career advanced and he became a well-respected and influential attorney.

As a young man Norden had become interested in local history and antiquities and had read Holinshed's Chronicles and Camden's Britannia. Sparked by these interests, he conceived the idea of creating a series of pocket (duodecimo) books on the counties of Britain which would include small maps with roads and indexes of places combined with the kind of historical descriptions made popular by Camden, but in English rather than Latin. He called the project the Speculum Britanniae or 'Mirror of Britain'. 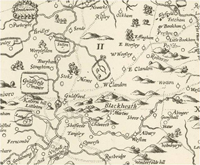 In order to raise funds for this undertaking, Norden applied to Lord Burghley, the Lord High Treasurer and chief advisor to Queen Elizabeth I, for his support and patronage. Burghley issued him a Royal Pass or Warrant, enjoining Justices of the Peace and officials all over the country to assist him in his surveys, and he received some initial financial assistance from William Waad, a clerk to the Privy Council.

Norden began the surveying work in 1591 and published the first of the planned series, Speculum Britanniae, the first parte. An historical and chorographical description of Middlesex in 1593. The map of Middlesex shown here is a slightly later example, 'Middlesex olim a trinobantibus habitata' [SHC ref M/826] which was engraved by William Kip for the 1610 edition of Camden's Britannia. This first volume of the 'Mirror of Britain' was dedicated to Queen Elizabeth. By 1594, Norden had completed more of the maps for the project and, perhaps to raise money, he published those of Surrey, Hampshire, Sussex and possibly Kent as separate items.

The Surrey map was engraved by Charles Whitwell at the expense of Robert Nicholson and also bears the arms of William Waad, suggesting that Norden raised some financial support from local contacts he made whilst undertaking the surveys. This is the earliest example of a county map with roads (marked as dotted lines). The map also illustrates the importance of Surrey's rivers as a source of power with the depiction of a large number of mills (15 on the Wey alone). The Whitwell engraving was lost until the 20th century when it was rediscovered and published by the Geological Society. The map of Surrey shown here is a later example, 'Surrey olim sedes Regnorum' [SHC ref M/133] engraved by William Kip for Camden's Britannia of c.1610.

By 1595 Norden, was desperately short of money to fund the publication costs and, in a further attempt to gain support, he sent a beautifully drawn manuscript volume containing a 'Chorographical description' of Middlesex, Essex, Surrey, Sussex, Hampshire, Guernsey and Jersey, with copies of some maps to the Queen'. This volume, which included the chorographical description of Surrey (but not the map), is now in the British Library [Add. MS 21853]. Experts have speculated whether the map of Surrey was later removed but there is no evidence in the volume that a page is missing. In the same year Norden also sent the Essex map and description to the Queen's favourite the Earl of Essex, hoping for support in the venture, again without success. In fact the Essex volume remained unpublished until 1840 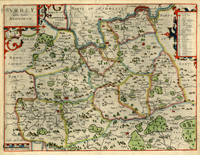 Norden's fortunes now suffered another more dangerous downturn. In 1596 he and other Puritans had allied themselves to the Earl of Essex, the new Lord Deputy of Ireland, and he had published a prayer 'for the prosperous proceeding and good success of the Earl of Essex'. Essex failed in Ireland, disobeyed the Queen and was imprisoned and, after a failed rebellion, was executed. All those linked to him were now in danger or disgrace. Norden tried to evade the association with Essex by lying; he claimed that another John Norden had written the prayer dedicated to Essex but this was apparently refuted. Although he avoided imprisonment, his good reputation was lost and, in 1598 when Lord Burghley died, he lost his most important patron as well. Despite managing to publish the second part, Speculi Britanniae Pars: the Description of Hertfordshire, in 1598, his project was abandoned and no further volumes for the Speculum Britanniae were published.

It was only after the Queen's death in 1603 that Norden was able to return to favour and he became a surveyor to the Crown, working mainly in the Duchies of Cornwall and Lancaster. By 1607 he was surveyor of the crown woods and forests in Berkshire, Devonshire and Surrey, and produced this map of Windsor Forest (modern copy) which shows parts of west Surrey including Chertsey, Guildford and Woking Park. [SHC ref M/532]. Despite the failure of his great project, Norden continued to work as a surveyor until his death in 1625. His county surveys survived and formed the basis for the work of many other cartographers including John Speed and John Blaeu for well over 100 years.

Two hundred & fifty years of map-making in the county of Surrey. Harry Margary, 1974