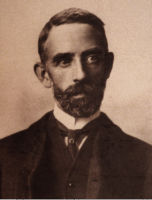 "To the memory of George Sturt who wrote with understanding and distinction of the wheelwright's craft and English peasant life". These words, engraved by Eric Gill, on a simple tablet in St Andrew's Church, Farnham, commemorate the writer and craftsman.

Sturt, who also wrote under the pseudonym George Bourne, was by trade a wheelwright, last of a family line who for several generations had carried on a small business in East Street, Farnham. The wheelwright's premises at the corner of what is now St Cross Street was bought by his grandfather, also George, in June 1810. By 1842 the family business had expanded to include premises across the road. His family also ran a stationer's and newsagent's shop at 18 The Borough, and it was in these premises that George was born in 1863. Maybe it was there that his love of reading and writing was developed, "I have an itch for writing that keeps me indoors". He attended Farnham Grammar School and was for a short time a pupil-teacher there and had at one time an ambition to be a sub-inspector of local schools before suddenly finding himself responsible for the wheelwright business when his father died unexpectedly in 1884.

Despite his love of his craft and the perfectionism in all he did, as shown in "The Wheelwright's Shop"(1923), which is an exemplary depiction of a rural craft, he found the routines of business irksome, and it was with some relief that he was able to go into partnership with William Goatcher, a master coach builder, and move the Sturt household out of Farnham to Vine Cottage in Lower Bourne. 'Seems a matter of shame, here clear-headed and awake, to be using this unsoiled morning for business, and yet already much has come before me for attention'. It was also typical that he chose to adopt the village name as his pseudonym in case others thought he was neglecting his business or in any way setting himself above his colleagues and fellow tradesmen.

He was a particular and exacting person who was self-critical and a perfectionist in all he did; like Gilbert White and his mentor Arnold Bennett he kept a commonplace book or journal, selections of which were published in 1941 and 1967, where he recorded his thoughts and the words of the working people he met and knew in the still rural area of south west Surrey. Some of his best writing is when he describes the countryside he loved, the rural people of the villages around Farnham, their crafts and traditions and the town markets, fairs, street games and customs of his own boyhood in "A small boy in the Sixties".

He also captured the humour and idioms of the locals, especially in the Bettesworth series where he retold with great affection the anecdotes of his gardener Frederick Grover, the 'Fred Bettesworth' of the book, "I never see such a slaughter as that was, done by moles, in all my creepin's". But he also included the darker realities for the rural poor, the worry of a poor harvest and the fear of the workhouse that overshadowed their day-to-day lives.

His best written and crafted piece of literature "Change in the village" (1912) describes in detail and with great compassion the difficult conditions for the rural poor in places like the Lower Bourne; recording the social changes brought about by the influx of a more affluent and middle class resident which actually made life more precarious and employment scarce for what had been a settled and centuries old local population. However, despite depicting much that had been lost in the rural life of the early twentieth century, Sturt was not a pessimist and concluded "Notwithstanding this, I would not go back. I would not lift a finger, or say a word, to restore the past time, for fear lest in doing so I might be retarding a movement which, when I can put these sentiments aside, looks like the prelude to a renaissance of the English country-folk".

After the Great War and with the rapid development of the motor-car Sturt felt even more distanced from a business which, in order to remain prosperous, had to change from traditional carts to coach and car building – "An entirely new era had begun in my ancient business, needing an active man to face the root-and-branch adjustments called for". In 1920 he made the decision to sell the works to William Arnold and was at last free to do what he loved, write.