The Bronze Age lasted from c.2500 until c.800 BC. It was part of the Pre-historic period (Stone Age, Bronze Age and Iron Age), a large chapter in history from which no written records survive. Therefore all we know about this period comes from archaeological excavations. An excavation in Esher conducted by the Surrey County Archaeological Unit (SCAU), from November 2013 to January 2014, uncovered important archaeological features and artefacts which help to tell us more about what life was like during the Bronze Age period in the Surrey area. 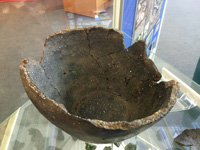 The truncated remains of a later Bronze Age shouldered jar were revealed during the excavation. The jar contained 32 fragments of copper 'bun' ingots. Copper and tin ore would have been placed inside a furnace and smelted to produce these ingots. They would have then been shaped to make a Bronze Age tool or weapon. The ingot fragments weighed 5805g in total. Given their size and quantity, it seems likely that they derive from more than one firing of the furnace. Some refitting fragments indicate that there were originally at least two ingots. Such discoveries, sometimes referred to as smelters' or metalworkers' hoards, are characteristic of the Late Bronze Age period.

Additionally, the discovery of a series of postholes on the site suggests the site was once occupied by a Bronze Age roundhouse or workshop. Consequently, this discovery is of high archaeological and historical importance.

The full hoard is on display in the foyer of Surrey History Centre.

Visit Exploring Surrey's Past, for more information about Bronze Age finds in Surrey.