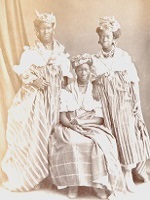 October is Black History Month! Surrey Heritage supports this international awareness campaign as part of our continuing aim to record and celebrate the lives of our county's diverse communities.

For centuries Black people have moved into Surrey from other parts of the UK and the world. Some came as merchants or economic migrants; some came as slaves. By whatever means they arrived in the county, Black people made Surrey their home and became part of the county's amazing diversity. As a result they appear in the county's historical records from the sixteenth century onwards and these records give us an important insight into their lives. You can discover more about the sources we hold for Black History and read some of Surrey's inspirational stories on our Exploring Surrey's Past website. If you would like to add your own Black History Month story to the archives we'd be delighted to hear from you; please contact us at shs@surreycc.gov.uk. 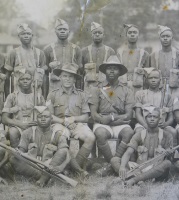 Surrey History Centre holds records of Black people in their everyday life and work in the county. At the end of World War II, chronic staff shortages in many sectors of employment led to skilled and unskilled workers migrating from many countries throughout the Caribbean and parts of Africa. The contribution of Black doctors and nurses to a growing National Health Service from the 1950s onwards is well documented. The records of Surrey's many mental hospitals reflect the contribution of Black doctors and nurses, for example photographs of Netherne Hospital in 1954. To see what records we hold for Surrey mental hospitals please see our online guide to Mental Hospital Records.

In the nineteenth century, the Surrey regiments were stationed throughout the Empire and their records include stunning photograph albums showing the different cultures that the soldiers encountered through their presence in far-flung places such as 1880s Trinidad. Other regimental photographs capture the vital role that Black soldiers played in supporting the regiments, such as the 7th Battalion Gold Coast Regiment, Royal West African Frontier Force, in the 1930s.

Reaching farther back into Surrey's history, The Royal Philanthropic School was founded in 1788 to reform some of the many pauper children in London's criminal underclass. (See Royal Philanthropic School records held at Surrey History Centre.) One such pauper was Thomas West, whose story is a rare recorded example of a young Black boy living in Georgian London. We not only have a record of his misdemeanours as a child thief, but we see him put on the path of reform and begin a new life outside the city and his poor, criminal surroundings. 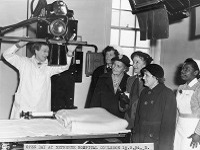 This year's 70th anniversary of the MV Empire Windrush arriving from the Caribbean in 1948 has awakened interest in the more recent Black History of the UK and how families can trace their Black ancestry. New research on how Black communities became established is constantly emerging, particularly through research and exhibitions by the Migration Museum and the Black Cultural Archives. The amount of sources and information accessible online for those tracing Black ancestors has never been greater or more exciting. One leading online resource is Recognize, a community based social enterprise which promotes positive diversity by raising awareness of the heritage and culture of the African-Caribbean community. The resource features a fascinating array of blogs and articles about British Black History including stories from the Empire Windrush immigration to Black soldiers in the First and Second World Wars. 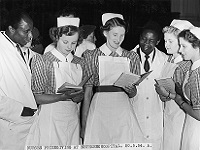 Tracing Black ancestors in Britain can be challenging as few records are held here. Each country of origin maintains its own archive and register offices, and records may be incomplete or not survive at all. However, with more records being made available online every month, it is not an impossible task. Family history subscription sites such as Ancestry.co.uk and Findmypast.co.uk contain a vast range of records, such as migration records, ships' passenger lists, naturalization records, land and property papers such as plantation records, and records of the Slave Registry and Slave Compensation Commission. Both these websites contain superb research guides for those seeking African and Caribbean ancestors, as well as members' family trees, and they are free to use at any Surrey library and Surrey History Centre. In addition, there are the key family history records of birth, marriage and death, military records, wills, newspapers, street directories and electoral registers, all of which can help pinpoint dates, places and occupations of family members. The BBC's hugely successful Who Do You Think You Are? programme regularly features celebrities tracing Black or mixed race ancestors, and DNA testing with genealogy companies is becoming increasingly popular too, with several high profile TV programmes featuring Black celebrities, including the athletes Michael Jordan, Jamie Baulch and Colin Jackson.

The following websites are useful for tracing Black family history:

Surrey History Centre can also help you in your quest. Our Seeking Surrey Ancestors webpage is a good place if you are setting out on tracing your family history. We also have a dedicated blog by our professional genealogist, Jane Lewis, which offers great advice and helpful tips on this exciting and often absorbing hobby. Our collections are free to use and open to all, so why not start delving into Black history this month and see where it takes you!