The 70th anniversary of the Battle of Monte Cassino

May 2014 marked the 70th anniversary of the Battle of Monte Cassino, fought over four main battles between 17 January and 18 May 1944. Following a major American bombing campaign in February 1944, the Germans took up position around the ancient hilltop abbey of Monte Cassino and the nearby town. The strategic importance of the area around Monte Cassino lay in its position within the 'Gustav' line, defending the approaches to Rome. The first battle took place between 17 January 1944 and 11 February, the second battle, following a bombing assault on the abbey of Monte Cassino, took place between 15 and 18 February, the third battle between 15 and 23 March, and the fourth and final battle between 11 and 17 May 1944.

Among the personal papers of men who served with the East Surrey Regiment are eight letters from Private Robert Charles Leslie Watkins (1925-1944) of the 1/6th Battalion to his parents in Epsom, Surrey (SHC ref ESR/25/WAT/1-13). His first letter is dated 27 November 1943, when he was still stationed in North Africa, and his last is dated 10 May 1944, two days before he died at the Battle of Monte Cassino.

The letters do not offer an insight into actual combat situations and certainly not into the strategic course the battle was taking between January and May 1944: army censorship did not allow such information to be relayed. Much of the content of the letters could be said to highlight the often mundane nature of everyday life in the army, referring to makeshift lamps made out of a piece of rope and a tin of brasso, and washing with well water held in mess tins. Indeed, the poignancy of the letters could be said to lie in the largely routine nature of their content coming, as they did, from a young man 19 years old who, like many others of his age, could think of little more than doing his duty and caring for his family.

On 7 April 1944, Private Watkins writes to his mum and dad, saying "I've a feeling we might have invaded Gerry by the time this reaches you ... look after yourself when things do start and try to get a place fixed in the house so it can be made gas proof just in case", and "he [Germany] is beaten as far as the war is concerned" (SHC ref ESR/25/WAT/4). Poignantly, in the same letter, he writes "Well I don't know what the future holds, but whatever it is I shall be ok and have now got plenty of confidence in myself". 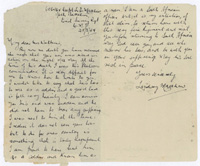 In his last letter home, dated 10 May 1944, Private Watkins refers to the humour of his mates in 'D' Company who write on the wall of their huts, "Free entertainment for any one visiting the continent. Listen to the harmony of the sobbing sisters and make your heart and pulse beat faster with the song". He explains "The sobbing sisters is the nick name we give their double-barrelled mortars". He describes how he could not sleep the night before "as the blanket was off my feet and the chap next to me kept snoring".

Other papers within this collection include a likeness of Robert Watkins drawn by one of his mates in 'D' Company, and a letter from his commanding officer to his parents following his death.

For reminiscences of Surrey Regiment veterans at Monte Cassino and the Italian campaign see:

Select images for a larger version.