Surrey History Centre holds many papers and photographs relating to the First World War and the collection is growing. Through the work of the HLF-funded project, Surrey in the Great War: a County Remembers, some fantastic items were presented to the Centre by Mr Gibbs of Claygate in March 2017 (SHC ref SGW/12). The collection relates to Mr Gibbs' family, and the main story it helps to tell is that of Aircraftman Arthur Coombs and his four elder brothers who all served in the military during the war. The collection includes photographs of Arthur and his brothers, and postcards written to their mother.

Arthur Coombs was born on 2 January 1900 in Cobham, the fifth of the eleven children of Henry Coombs, brickmaker, and Clara (née Swift). The family lived at Little Heath, Cobham, near Oxshott Brickfield. From 1916 to 1917 Arthur worked as a garden boy at The Mount, Queen's Drive, Oxshott, the home of solicitor Montagu Piesse, where his father also worked. He then became a driver at the Oxshott Motor Company. Amongst the items donated are Arthur's driver's licence and the cockade which was part of his driver's livery.

Arthur joined the Royal Naval Air Service on 11 January 1918 and transferred to the newly-formed Royal Air Force on 1 April 1918, spending time in Germany (one of the places from where he managed to send a selection of postcards home). Another item from the collection is his RAF dog tag. In February 1919, Arthur extended his service for 2 years and embarked for Egypt in November of that year, stopping off in Malta (again sending postcards to his family). In Egypt, Arthur developed dysentery and eventually died in Ras-el-Tin military hospital, Alexandria, on 4 August 1920. One of the items in the collection is a touching letter from the Matron of the hospital warning his family that he was gravely ill. He was buried in Chatby Military and War Memorial Cemetery, Alexandria, Egypt.

Frank Arthur Coombs (1892-1967), brickmaker, was a Private in the East Surrey Regiment and the Labour Corps;

George Henry Coombs (1894-1979), gardener, was a Private in the 2nd Battalion, the East Surrey Regiment, joining the Royal Flying Corps in 1918;

William (Bill) Richard Coombs (1896-1971), gardener, was a Private in the 7th Battalion, the East Surrey Regiment, and was awarded the Military Medal; 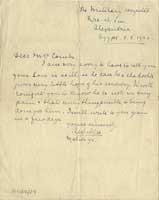 Mr Gibbs (who donated the items) is the nephew of Arthur Coombs; his mother, Ivy, was Arthur's youngest sister. Mr Gibbs attended a talk given by the Surrey in the Great War project team to Esher and District History Society in February 2017 about the effects of the war in the locality. He spoke to the team after mentioning that he had an interesting First World War related family story and papers and memorabilia. The project team invited Mr Gibbs to Surrey History Centre where it was agreed that he would present his records to the Centre for safe keeping and posterity. Mr Gibbs also agreed to be an interviewee for the Surrey in the Great War oral history project, thus providing a valuable secondary resource to expand upon the story behind the items.

If you have a Surrey related story about the First World War, we would love to hear from you. You can email us at surreyinthegreatwar@surreycc.gov.uk. For more information visit the Surrey in the Great War Project website. 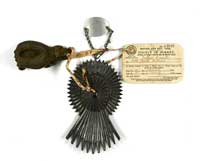