After the Armistice - a Soldier’s View

With thanks to members of the Surrey in the Great War team.

At 11am on 11 November 1918, the Armistice between the Allies and Germany came into effect bringing four years of fighting on the Western Front to a halt. Away from that front, fighting continued while peace negotiations got under way and it took several more years to finally end the Great War. The Armistice was prolonged three times between 1918 and 1920 although the Treaty of Versailles of July 1919 was the most important of the peace treaties that brought the war to an end. The Treaty ended the state of war between Germany and the Allied Powers. Four years later, the Treaty of Lausanne, signed in the Palais de Rumine, Lausanne, Switzerland, on 24 July 1923 officially settled the conflict between the Ottoman Empire on the one side and France, the British Empire, Italy, Japan, Greece and Romania on the other.

The response to the 1918 Armistice was surprisingly mixed. In many towns and cities – especially those freed from enemy occupation – there were scenes of great rejoicing. Big Ben rang out in London for the first time since 1914. However, the celebratory mood was tempered by the grief of the many thousands mourning those killed. 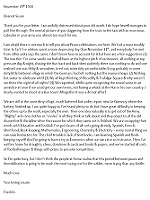 For the troops on the Western Front the situation had suddenly changed, from living in daily fear of death to the prospect of peace and potential boredom following the Armistice. British officers struggled to maintain order and discipline among the men in their command, many of whom wanted to get home as quickly as possible.

A letter of one officer, Franklin Lushington, written a few weeks after the Armistice, described the situation:

"I am afraid there is not much to tell you about Peace celebrations out here. We had a most mouldy time. In fact I've seldom spent a more depressing day than November 11, and everybody I've met from other units says the same."

"I don't think the people at home realise that this period between peace and demobilisation is going to be much the most trying one for the soldier, more trying than any battle."

Franklin was writing to his cousin, Susan Lushington (SHC ref 7854/4/7/4/26). During both World Wars Susan corresponded with a large number of servicemen based at the army camp at Bordon near her Kingsley home. They were invited into her home to share her musical interests and later wrote back to her from the front line. An archive of Susan's correspondence is now held at Surrey History Centre, along with many other papers relating to the Lushington family of Ockham and Cobham (SHC ref 7854).

There is more about the Lushingtons on the Exploring Surrey's Past website where it is possible to browse the archive catalogue. 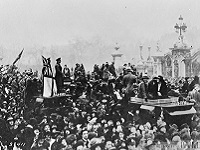 More stories about Surrey in the Great War