October is Black History Month. Surrey Heritage has supported this international awareness campaign for nearly twenty years, acknowledging the need to preserve the history of Black lives in the county and raise awareness through our collections and outreach. However, the seismic impact of the Black Lives Matters movement this year reinforces the importance not only to celebrate the lives and achievements of Surrey's Black Asian and Minority Ethnic (BAME) people but to reveal and acknowledge how these people were treated in the past.

Our unique archive and library collections are a powerful tool in the fight against discrimination and inequality. Through education comes understanding and tolerance and we present these important life stories, some of them uncomfortable to read, using historical material from the collections and with context. We welcome any new information which helps us to develop our collections and expand the dialogue about Surrey's BAME connections, so please contact us. This year we take a look at the Abolitionist movement in Surrey.

The road to Abolition

There had always been resistance to colonial slavery, from the enslaved themselves and from within the colonised countries, but by the later eighteenth century there was growing opposition to the barbaric trade from within Britain. These vocal critics were called Abolitionists, and each had their own unique perspective, be it religious, political or philanthropic. Abolition was debated in Parliament but also by ordinary people, in the home, at the local inn, or in a place or worship.

The movement gathered pace once the British slave trade had been officially abolished in 1807 and full emancipation came in 1833 with The Slavery Abolition Act. By this date, over one hundred slave owners in Surrey still owned many thousands of enslaved Africans for which they received compensation for the loss of what was perceived as their 'property'. Far from being free, most of the enslaved entered an 'apprenticeship' scheme which still kept them in unpaid labour until 1838. In the East Indies slavery was still not abolished until 1843.

What was Surrey's contribution to abolition? Here are three examples of how some people in Surrey fought for the end of slavery.

The Religious Society of Friends, or Quakers as they are now better known, were committed abolitionists, denouncing the enslavement of their fellow man on moral grounds. They threatened action against any members of the faith who ignored the Society's unbending stance on slave ownership. In 1787 a small, mainly Quaker group formed The Society for the Abolition of the Slave Trade which was supported by Quaker Meetings, including those at Capel, Charlwood, Dorking, Reigate, Godalming and Guildford. Directives from the Yearly and Quarterly Meetings gave clear instruction for members to campaign for abolition and stand firm against the abhorrent trade. This sentiment is evident from surviving papers in the minutes of Godalming Society of Friends Monthly Meeting dated 1784 (SHC ref G124/9/5), and the Sussex and Surrey Quarterly Meeting of 1821 (SHC ref 6189/13/7).

Quakers provided a consistent, relentless protest and they campaigned against the continuation of slavery in places such as America, where it was not abolished until 1865. The Quaker Book of Discipline used by Reigate Preparative Meeting, which was issued by the national Yearly Meeting, includes these concerns as late as 1861 (SHC ref 9090/7/2/1). 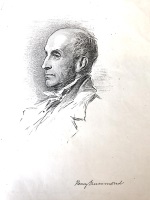 Guildford Anti-Slavery Committee was formed in 1824 to support the national Anti-Slavery Society. Meetings were usually held in members' houses and their minute book records those attending every meeting between 1824 and 1831, including clerics, solicitors, gentry and tradesmen (SHC ref G21/9). Members distributed pro-abolition publications in public places, raised money for the anti-slavery cause, and lobbied across Surrey. The committee was part of a growing movement which nationally, between 1828 and 1830, deluged Parliament with over 5000 petitions.

In 1831, a surge in campaigning resulted in the sending of 150 handbills, 2 signs, and 100 circulars to influential persons in the area. The minutes contain a draft of a petition sent to Parliament presenting the committee's moral stance against the "…horrid and merciless system of oppression by which many hundreds of thousands of the human race, in our West Indian colonies, are held in a state of bondage, degrading to our common nature, offensive to the liberal spirit of our laws, and most repugnant to the genius of the Christian religion." 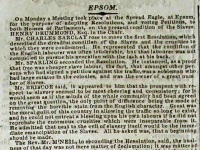 In the same year, the committee organised a public lecture by their most celebrated member, Henry Drummond MP, of Albury Park, an abolitionist who had form in chairing anti-slavery meetings, including one at The Spread Eagle public house, Epsom, in 1826. This was reported in the Morning Herald of 5 March and shows the complexity of the argument, which not only discussed the poor working conditions of the enslaved but also the British labourer, as well as the national feeling of 'moral guilt', and the apathy of the British people on the matter. The meeting resolved to petition parliament to free the enslaved in British colonies and 'the whole community had been agreed on the great question, the only point of difference being the mode of removing the horrible stain from the English character' (SHC ref G52/12/15).

Dr Stephen Lushington was a judge, political reformer and anti-slavery campaigner, who lived at Ockham Park between 1845 and his death in 1873. Lushington spoke and voted for abolition in 1807 and even wrote a poem denouncing slavery, in 1823 (SHC ref 9378/1). However, he was chiefly responsible for the act of 1824 which abolished the transfer of enslaved people between British colonies. Lushington worked closely with Thomas Fowell Buxton, Wilberforce's successor as leader of the anti-slavery movement. In 1833, both men were key in securing the Slavery Abolition Act, and are commemorated alongside Wilberforce on the monument to emancipation, in Westminster, erected in 1866. Ever the reformer, Lushington continued to campaign and when the British and Foreign Anti-Slavery Society was formed in 1839 he attended its first Convention.

The 1841 painting of proceedings by Benjamin Robert Haydon, captures Lushington, with Buxton and Lady Noel-Byron, of Esher. Through his campaigning Lushington had met Charles Sumner, an American lawyer and leading figure in the abolitionist movement there. Sumner visited Lushington at Ockham in 1857 and as a result of their friendship, and the philanthropic encouragement of Harriet Martineau and Ada Byron, Lushington gave refuge at Ockham to William and Ellen Craft, two celebrated escaped slaves who had endured horrific conditions in Georgia. The Crafts' children were baptised and educated locally and some of their descendants still live in Surrey today. You can discover more Black History in Surrey on our Exploring Surrey's Past website.