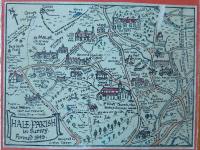 In 1957 Stewart Dobbin, headmaster of Hale County Primary School, near Farnham, visited Sacramento, California, on a school exchange programme, and met J Martin 'Mike' Weber who, in 1949, had joined the Sacramento County Office of Education as an educational consultant, with special emphasis on the sciences. Weber's archives held at the Center for Sacramento History reveal that his interests in educational exchanges included a long association with the Japanese American Student Exchange and Conference program. Amongst his papers was a scrapbook entitled 'Our World' and produced by the children of Class III at the Hale school, which was created at Weber's suggestion after Mr Dobbin returned to Hale, and then sent to him.

The scrapbook was recently returned to us by Kim Hayden, senior archivist at the Center for Sacramento History, along with the letter from Stewart Dobbin to Martin Weber, enclosing the scrapbook, in which he wrote 'they are nine year olds and the work (except of course for some of the photographs) is entirely their own'. 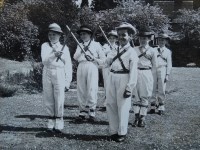 The scrapbook from 1959 (SHC ref 10337/1) contains cheerful and amusing accounts written by the children about the village and their school, and is illustrated with photographs and drawings of school life. The photos include the school buildings and garden; children in groups and engaged in activities including sports (netball, football, boxing, gymnastics), country dancing and Morris dancing, plays, music and singing; and the caretaker Mr Harrington.

Inevitably in the children's writing school dinners featured: 'For dinner today we had roast beef, roast potatoes, tomatoes and cabbage, for pudding we had fruit salad. As they are such nice dinners we are not allowed to leave them'. 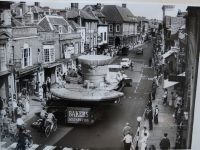 One of the pupils, Judith Hunt, wrote rhyming verses about the school such as: 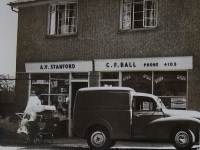 The school nature club had 'budgies and tropical fish' and 'if the budgies are overcrowded the pupils buy them'. The caretaker, Mr Harrington, 'sees the children across the road after school and before school and at dinner time. He puts the tables and forms out for dinner. He clears up accidents. He mends things that are broken. He keeps the school clean and does the boilers and he helps us when we are in trouble'. There was a school trip to the 'very old and antique' Castle Theatre in Farnham. School films included a coloured cartoon called 'How to catch a cold', played on the school's own projector. St Mark's church was said to be 'very warm' with some books 'all about Jesus'.

Cuttings show that the local newspaper took an interest and it even led to publicity on the BBC television programme 'Town and Around', a nightly five minute slot for regional news, on which the Hale school children and the scrapbook appeared.