A visit to Mr Darwin 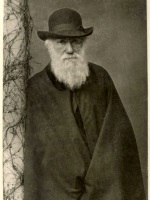 Few people have changed the way we observe and understand the world so much as Charles Darwin, who died almost exactly 132 years ago on 19 April 1882.

Darwin spent most of his life after disembarking from the Beagle sequestered with his expanding family in Down House in the depths of the Kentish Downs (still surprisingly remote today, though a stone's throw from London sprawl). However his connections with Surrey were several and intimate. His sister Caroline married Josiah Wedgwood III (just as Darwin's mother and he himself had married into the Wedgwood clan) and they settled in Leith Hill Place where they were visited by Charles and family. Vernon and Jane Lushington of Pyports in Cobham were close friends and were instrumental in bringing about the union of Henrietta ('Etty') Darwin, Charles's daughter, to Richard Buckley Litchfield, one of Vernon's oldest and closest friends.

There was also Thomas Henry Farrer, nicknamed 'Theta', Permanent Secretary to the Board of Trade and keen amateur botanist, who in 1873 married Darwin's niece, Katherine Euphemia (and this will come as no surprise) Wedgwood, known as Effie. They resided at Abinger Hall and in August 1877, the Darwins visited them there; Charles was fascinated by the worm casts in the tesselated Roman pavement discovered at nearby Eversheds. In November Thomas and Effie made a return visit to Down House which moved Thomas to write a delightful and warm account in his notebook, now held by Surrey History Centre (SHC ref 9609/4/3/2). The visit began on 25 November, eighteen years almost to the day after Darwin's publishers had detonated 'The Origin of Species'. 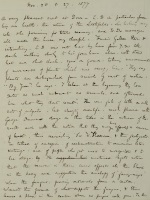 The Farrers found Darwin in fine fettle with his ever-inquisitive mind still wrestling to unravel the mysteries of nature. Thomas writes, "CD was out hour by hour from 7.30 till dark walking slowly to his greenhouse alone, with straw hat and short cloak, eyes on ground, taking measurements of movements of plants which now occupy him. "They say plants are distinguished from animals by want of motion". "By Jove!" he says, "I believe at the beginning they have quite as much movement as animals, and afterwards lose what they don't want".

Darwin was also intrigued as to how some people came to be unaffected by mosquitoes and bee stings. "He suggested the analogy of 'fairy-rings' where the fungus, growing outwards from a centre exhausts the ground of what supports the fungus, and thus leaves a place in the centre where no fungus will grow. In this same way, he thought, venom may exhaust in time whatever in the body is capable of being affected by it. The characteristic thing was that he spoke of it simply as an analogy, which might prove quite false." 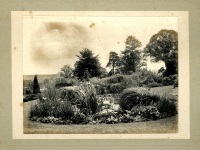 Thomas was very struck by Darwin's cheerfulness and cordiality, his willingness to accept gentle ribbing from his family, his interest in politics (both men were firm Liberals) and his seeming openness to new suggestions, even uninformed ones. However, as Thomas noted there is a certain "Ah, indeed"! with which he receives a new fact or assertion, which may cover a great deal of incredulity and sarcasm.

No one would call Down an elegant house and Darwin paid little heed to interior décor nor elaborate cooking. Thomas observed the heavy Victorian plainness that predominated: "the table was good – better than usual. Art decoration spreading even into that house, where it certainly was not much of a feature. Much substantial comfort, but few prettinesses, and absolutely no show." 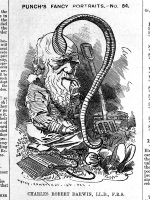 He was also much struck by the informality on display but also that the household revolved around the great naturalist: "The want in the house is privacy, but this does not apply to C.D. Everything is done to favour his work. He comes in and chats when and as long as he likes – sometimes too long, and Mrs D. says severely "Charles, when do you think of going to bed" or "when do you mean to have done talking"! upon which he generally retires. Effie chaffed him more than usual …. saying "Uncle Charles, I am thinking whether I shall try to read one of your books"! to which he ultimately replies "Goodbye Mrs Impudence".

The friendship of Darwin and Farrer was severely tested shortly afterwards, when Thomas's daughter by his first marriage, Ida, fell in love with Charles's youngest and feeblest son Horace. Thomas was hoping to find a wealthy lawyer or banker for Ida and Horace's seeming lack of prospects alarmed him. True love prevailed and the couple were married on 3 January 1880, but relations were still very strained. Happily the breach was repaired before Darwin's death in 1882.