A Family at War: the Eaton Cottage Herald 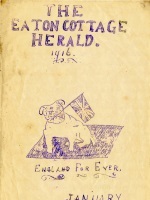 The Brockman family lived at Eaton Cottage, Thames Ditton. For at least part of World War One, its members produced a little, monthly home-produced newspaper, the 'Eaton Cottage Herald' (SHC ref 9497), presumably for the entertainment of friends and relatives. The household comprised Herbert Brockman, his wife Isabel, their children Miles (b.1903) and Nancy (b.1906) and the children's nurse Elsie May Taylor. All but one of the surviving issues of the newspaper date from 1916.

The newspapers paint a charming picture of a comfortable middle-class life. The war scarcely intrudes and, instead, the newspapers are full of descriptions and drawings of boating on the river, seaside holidays, bike trips, bird nest raiding, camping and cooking in the garden, dressing up and amateur theatricals. The adventures of the family's dogs are lovingly chronicled. However, the great conflict always lurks in the background. The children's games make reference to it, and snowmen built in the garden in March 1915 (or perhaps 1916) were given topical identities.

The family played a full part in the patriotic war effort. In March 1915, "the fretwork craze has given us many hours of labour and has resulted in our being able to send several picture puzzles to the hospitals for the amusement of our wounded Tommies". In October, we learn that "Our Day (Red Cross fundraising day) found Mother busily engaged in selling flags with the great assistance of Nancy and Elsie, and, let us add, Jim (the dog), who ran around and fought dogs who did not agree with flag days". In November, "The ladies of the house are knitting very industriously for the soldiers while Nancy sits and sews" (November 1916).

Herbert Brockman was too old (at least in 1916) to be conscripted. Instead, he enrolled as a Special Constable to support the police and he is shown proudly wearing his new uniform (March 1915). In October 1916, it is reported that he has been promoted to the rank of Sergeant. 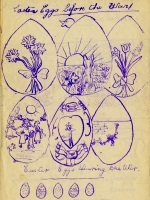 Increasing shortages are also touched upon. A cartoon of a mother bird feeding her chicks is captioned, "Now then children, you must make this worm go a long way because it's wartime" (May 1916). A mournful depiction by Nancy Brockman of pre-war Easter eggs and the eggs they were faced with in 1916 speaks for itself.

In the midst of increasing austerity, the family kept up spirits with bad jokes which stressed the justice of the cause for which they were fighting.

Christmas 1916, was to have been spent at the Brockmans' 'other home'. That edition of the newspaper was never completed; it is not known if further editions were produced, but it seems unlikely. Perhaps paper shortages or perhaps a change in family circumstances brought an end to this charming record of one family's experiences during the war.

Surrey in the Great War's fascinating new book, 'In the Shadow of the Great War: Surrey 1914-1922', has now been published. Purchase your copy from our online shop.