What is a Court Roll?

A Court Roll is the formal record of a manorial court, kept by the steward of the manor. It will contain entries relating to rents and holdings, deaths, alienations, and the succession of tenants of copyhold land, so called because a copy of the relevant entry in the Court Roll constituted the tenant's title to his holding. Before the widespread manufacture of paper, parchment was commonly used for court rolls and other important documents.

Parchment is animal skin: sheepskins were commonly used to provide a strong writing material while calfskin (vellum) is a superior quality skin used for fine bindings and manuscripts. The skin of the animal was cleaned of its hair and wool by washing and soaking in a vat of lime. The skins were then stretched on a frame and a crescent shaped knife was used to remove the last of the hair, fat and muscle tissue and to get the skin to the right thickness. Similar techniques are still used today to produce high quality skins.

Suitable storage conditions for parchment are important as they have a major impact on its stability. Excessive humidity causes distortion, and the risk of mould growth and dry conditions result in brittleness and inflexibility and may cause the inks to flake away. Fluctuating periods of high and low temperature and humidity can cause further damage to parchment as it expands and contracts through changes in moisture content. 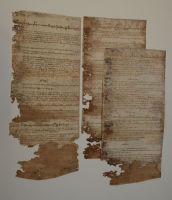 Sadly this Court Roll (SHC ref 2163/5/1) had been subject to very poor storage conditions. A large proportion of the parchment had been lost and weakened by mould growth caused by damp conditions over an extensive period of time. In the conservation studio, the Court Roll was placed in a humidification chamber to allow the careful separation of its 17 membranes (parchment skins). These membranes were further treated to achieve a gentle flattening process, and to re-secure loose, flaking text and strengthen areas damaged by mould.

Fortunately, parchment is an extremely durable material so, with good handling and storage practice, its future is a good one.