Throughout 2018 the RAF has been celebrating its centenary, with some amazing events taking place around the country.

On 10 July 2018 a spectacular event was held in London, including a fly past featuring displays of aircraft from all eras. To support the occasion St James's House produced a commemorative book 100 Years of the RAF, providing a record of the past, present and future of the worlds oldest independent air force.

We are very proud that included in the book is a section outlining Surrey's military heritage. Our thanks to St James's House for allowing us to share it below.

A film has also been produced recording the event and presentation of the book at the Household Cavalry Museum.

Carefully tucked away in the archives of Surrey County Council (SCC) are letters, sketches and blueprints by the inventor of the bouncing bomb, Sir Barnes Wallis. These items date from the years when the aviation engineer was working on the now legendary weapon that the RAF used in Operation Chastise, the "Dambusters" raid of May 1943, which struck at Germany's industrial heartland.

A resident of Effingham, Wallis secretly developed the weapon at Burhill Golf Club, making the clubhouse his headquarters, and at Foxwarren Park, while the Germans targeted Brooklands. One of the country's first aerodromes, Brooklands was a major aircraft testing and production site from 1907. In the Second Word War, the airfield housed Hawker and Vickers factories making Wellingtons and Hurricanes until it suffered extensive damage in an air raid on 4 Sept 1940. Also the site of Britain's first Grand Prix race track, Brooklands is now an aviation and motor museum. 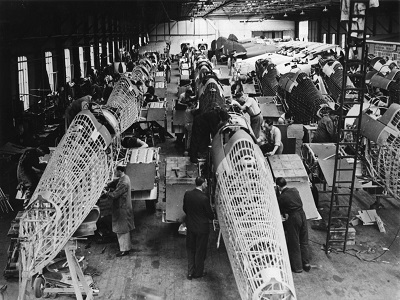 These are just a few of the highlights of Surrey's rich RAF heritage, according to SCC Chairman Peter Martin.

"We're very proud of the relationship and the history behind it," he says. "The connection with the RAF continues to this day, with the Air Forces Memorial in Runnymede, which commemorates all air force men and women who lost their lives during the First World War"

In 2012, SCC demonstrated its ongoing support for UK servicemen and women by signing the Armed Forces Covenant. This has ensured fairness and equal opportunity for serving and ex-members of the military in Surrey, both in employment and when receiving council services and assistance.

Being in the forces is hugely rewarding but can bring with it a complex set of challenges. "It can mean moving around frequently," says Martin, "so getting your children into the school of your choice can be a problem. Life can be transient, which can raise practical issues such as registering with a GP, or feelings of isolation. But we're trying to lead by example in terms of being military friendly, and sharing best practice with others. "

Armed forces charities are linked up with SCC's adult social care team through a referral scheme run by our contact centre to provide practical support. Funding has also just been secured for veterans' drop-in centres across the county. "Many veterans are quite proud," says Martin, "so we're trying to use football clubs and neutral venues as alternatives to council offices or GP services."

To promote a greater understanding of the issues affecting the armed forces and their families, SCC helped establish Forces Connect South East with a Covenant Fund grant. The project's goals include better training for public sector staff in supporting the armed forces community to ensure they are not at a disadvantage. "We recognise that armed forces personnel are not always forward in seeking support," says Martin. "So we're raising awareness of their needs in relation to employment, housing, healthcare and education for example."

In recognition of its support for the armed forces SCC, in 2016, was one of the first county councils in the country to receive the Employer Recognition Scheme Gold Award from the Ministry of Defence. As a pro-military employer Surrey employs 25 reservists and many veterans. Initiatives such as work experience placements and raising awareness of vacancies demonstrate SCC's commitment to helping former military personnel into rewarding jobs and careers.