On Friday 28 June 2019, the team at Guildford Fire Station threw open their doors to welcome local veterans. Seventeen members of the armed forces community popped in to the informal event, enjoying good company, a tour of the station and even a freshly cooked bacon butty. 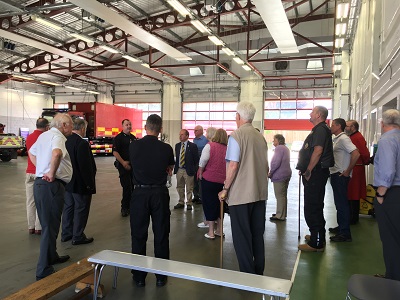 Guildford Fire Station has strong links with the armed forces and were keen to do something during national Armed Forces Week (24-29 June 2019) to show their respects and say thank you to the armed forces community.

Everyone was in agreement that they would like the chance to meet again and plans are now in place to make this drop-in a monthly event, open to all local veterans. Further details will be available via the Armed Forces Calendar in due course.

"It was an absolute honour to have these military veterans come to Guildford fire station for a bacon roll and a brew.

A high proportion of Guildford's Green Watch are reservists. Watch the video below to see how and why this works so well for all concerned.