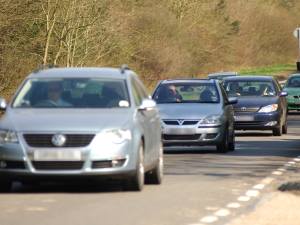 Faster vehicle speeds increase the risk of collisions and makes the consequences far worse. Speeding vehicles also deter more walking and cycling and can make places less pleasant to live in due to increased noise and air pollution.

This approach asserts the principle that road users will make mistakes, yet at the same time people have a right to safe and healthy mobility. Therefore, it is the responsibility of organisations to work together collaboratively to make the entire road system as safe as possible for all road users. A key priority of this approach is safe vehicle speeds.

How do we tackle speeding vehicles in Surrey?

We work closely with Surrey Police to develop local speed management plans for each of Surrey's eleven Districts or Boroughs.

This means that whenever there are concerns about speeding at a location, we will go and measure the speeds using a device called a speed detection radar. This is a box that is mounted on street furniture such as a lamp column, without most people knowing it is there or what it is for. One can be seen in on this Google Street View.

Our road safety specialists meet periodically with Surrey Police's specialists to discuss and agree which sites need the most attention, and what the most appropriate intervention will be. More information on the types of intervention that we use are described below.

Traffic calming features are measures designed to slow drivers down by physically restricting vehicles and making it uncomfortable for drivers and passengers if their vehicle is driven too fast.

Traffic calming is very effective at reducing speeds in 30 miles per hour or 20 miles per hour speed limit areas but cannot be used on higher speed limit roads. Vertical traffic calming is not usually considered for more strategic routes with larger volumes of traffic and heavy goods vehicles where the road is close to residential properties because of the possibility of noise and vibration.

Permanent safety cameras are considered at locations where there has been a long-term problem with drivers speeding that has not been possible to solve through other means, and where traffic calming measures are infeasible. There are several types of safety camera:

Our policy on the use of speed cameras (agreed in partnership with Surrey Police) was approved by the Cabinet in September 2021, please see Cabinet Report Safety Camera Policy (PDF). 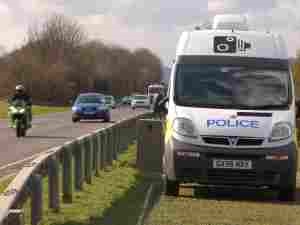 Safety camera vans are used to deter speeding at sites that require regular enforcement, and where there is room at the side of the road to position the vehicle. Where there isn't room for a camera van, the police are able to provide enforcement using hand-held laser equipment. 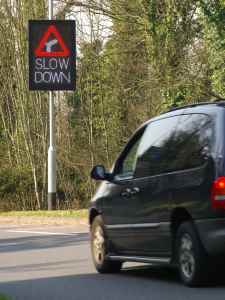 Within Surrey we do not use the "smiley face/sad face" or the "your speed" vehicle activated signs. This is because these signs illuminate for every driver that passes, and we feel that they eventually become part of the background and ignored. Strictly speaking these signs are not allowed under road traffic legislation either. In contrast the signs we use in Surrey are set to only illuminate for the smaller population of drivers who are exceeding a set threshold, and so act as a more prominent reminder for those who need it and are legally allowed.

Community Speed Watch is a scheme managed by Surrey Police to allow volunteers to monitor the speed of passing vehicles using a hand-held speed detection device. The volunteers record the details of speeding vehicles, and then the police will issue a letter to the vehicle owner, advising them of the dangers of speeding, and reminding them of the law. Further action will be undertaken by the police for repeat offenders. Training and equipment are provided by the police who will also undertake an assessment of suitable locations for the volunteers to operate from.

Tell us about a highway issue - speeding