What is the Woking Town LCWIP?

LCWIPs are the best practice approach nationally for planning walking and cycling improvements and our process follows Department for Transport guidance. To find out more about LCWIPs, including what they are and the process that we have followed to develop LCWIPs for the county, please see our plans to improve walking and cycling page.

The Woking Town LCWIP aims to create a wider walking and cycling network for the borough and focusses on the strategic planning of this. Local neighbourhood and street level interventions are not included within the LCWIP and will be part of separate workstreams that aim to improve walking and cycling provision at smaller local scales. For example, we aim to develop 'Liveable Neighbourhood' schemes to increase the comfort, safety and accessibility of walking and cycling on residential roads by recognising the importance of these streets as places for people, and not just their importance for the movement of vehicles. 'Liveable Neighbourhoods' will create attractive local environments that connect residents to the wider LCWIP network and make walking and cycling easier, safer, more enjoyable, convenient and fun for everyone. To find out more about our plans for walking and cycling at the street and neighbourhood scale, please see our Local Transport Plan policies for Planning for Place and for Active Travel and Personal Mobility.

If you would like to view the Woking Town LCWIP report in full, or see the annexes, please email surreytransportplan@surreycc.gov.uk to request a copy.

The LCWIP has considered the full extent of the town, with an emphasis on key trip attractors and destinations that will encourage and allow more people to take up walking and cycling as their everyday types of travel.

Woking has an established cycle network in the Planet Trails (on Woking Borough Council website). These are a planet-themed suite of cycle routes that cover much of Woking borough, introduced as part of the Cycle Woking initiative in 2009.

The LCWIP builds upon this investment to reach more of Woking's neighbourhoods with better quality cycling facilities.

This route covers the Basingstoke Canal towpath in both directions from the town centre. It will run to Hermitage Road Bridge in the west and Lambourne Crescent and Bishop David Brown School in the east.

Recommendations for this route focus on the section of the Saturn Trail between Arthur's Bridge in the west, through the town centre to Monument Road in the east. This section currently experiences high levels of cycling and it is an important connection between other existing and proposed cycle routes. Improvements will be sensitive to the canal's other functions. For instance, no new lighting would be installed away from the town centre, and cycle calming would be introduced to help walkers and cyclists share the towpath where separation is not possible.

Recommendations will improve upon the route's existing conditions, focussing on increasing comfort, safety and making the route easier to navigate.

The map shows the locations of the Phase 1 cycling routes: 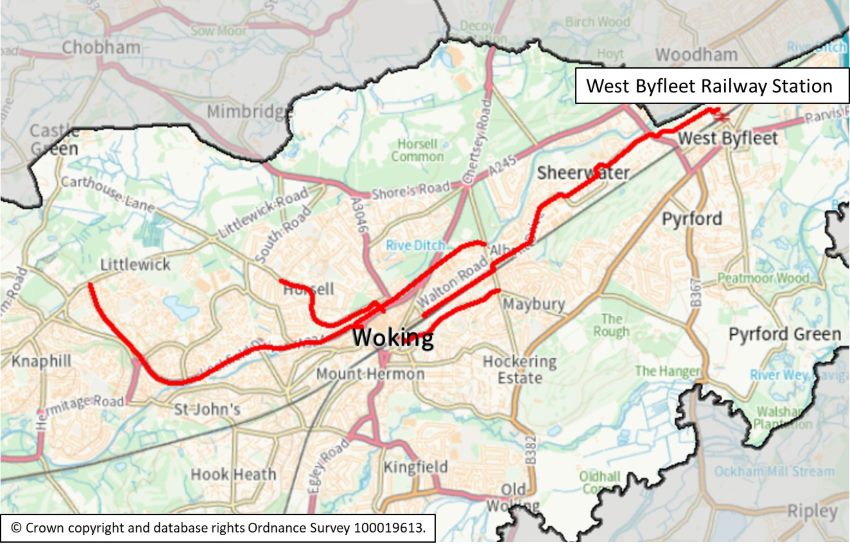 Recommendations include improvements to address the narrow footways, close proximity to traffic and high traffic speeds that are present along much of the route. A review of crossing locations will improve both convenience and safety. It is recommended that the missing section of footway linking to the entrance to Horsell Common and an associated crossing should be installed. The route would also benefit from the introduction of tactile paving, dropped kerbs, and resurfacing.

This route runs northeast away from Victoria Arch on the High Street, Broadway and then along Maybury Road to the Maybury Arch. The route is of high quality in the town centre, and this should be extended beyond Locke Way and out of the town centre.

Recommendations include resurfacing and widening pavements, making them fully accessible, removing pavement clutter, removing or replacing vegetation and addressing issues of cars parking on pavements. The route has high traffic volumes, speeds and noise, which will ideally be reduced. Sight lines and conflict points with both motor vehicle traffic and bicycles will be reviewed. There is no pavement on the south side of Maybury Road meaning that access to the bus stops located there and to the pavement on the south side of Broadway needs improvement.

Running from Monument Road canal bridge, the route follows Monument Road and then Maybury Hill to its junction with Old Woking Road. As this is already a popular route for pedestrians, the College Road section of this route is being prioritised for comprehensive improvements. Targeted improvements will consider the remainder of the route.

The prioritised section of the route would benefit from measures to reduce the dominance of motor vehicle traffic, as well as the replacement of damaged street furniture, and cleaning. On Maybury Hill, there are issues with footpath condition and proximity to traffic, and a need to introduce and modernise accessibility features such as dropped kerbs and tactile paving.

This route runs from Station Approach, along White Rose Lane to the Jack and Jill steps, and through the park. It heads between the ponds and passes to the east of the leisure centre before following Elmbridge Lane and Sundridge Lane to the St John the Baptist School and Woking College.

From Jubilee Square, the route heads north on Mercia Walk and Bedser Bridge, along the east side of Horsell Common and uses the footpath network around St Andrew's School to reach Wilson Way, Horsell High Street and Horsell Church of England Junior School. An additional section extends from the footpath network around St Andrew's School and along Ridgeway (a private road but with a public right of way) to reach Woking High School.

The off-road footpaths on this route are surrounded by high fencing, whilst footways are narrow and in poor condition in places. Improvements should address this, and the footpath network would also benefit from improved signposting. In the Horsell High Street area, high motor vehicle traffic dominance discourages walking to the high street and the condition of the footways is poor in places. Accessibility measures, such as dropped kerbs and tactile paving, are lacking and needed in some locations including outside Woking High School.

The map shows the locations of the Phase 1 walking routes: 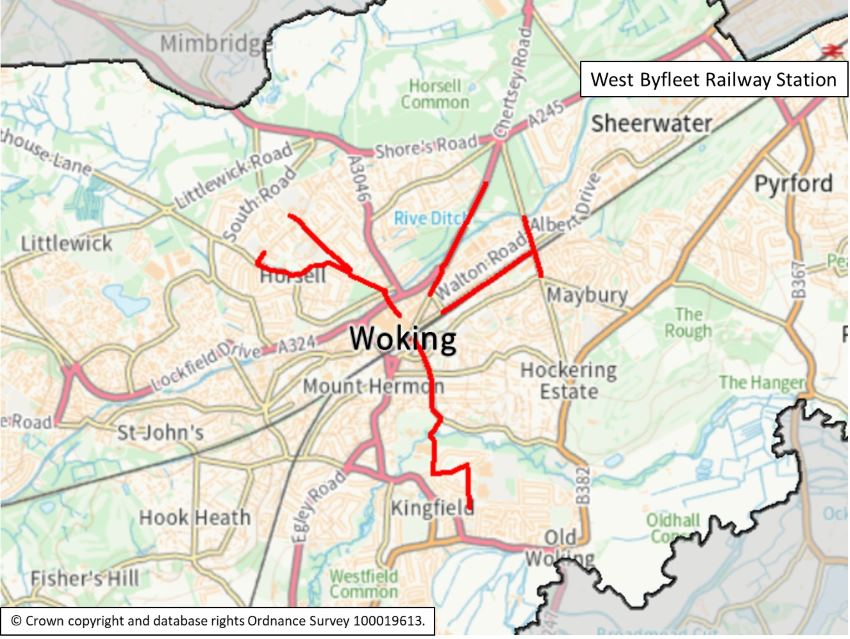 The Woking Town LCWIP report should be used to support the case for further stages of design, assessment, and stakeholder engagement, and to secure funding to progress improvements for the routes identified by the report. Because the LCWIP is intended to facilitate a long-term approach to developing active travel proposals, over a period of approximately 10 years, all of the routes identified are recommended for further consideration at an appropriate time.

The next stage of implementing the LCWIP will be to further develop the design concepts for the Phase 1 cycling and walking routes into a feasibility level of design and assessment. This will include full public consultation, allowing residents and other local stakeholders to have their say on the individual scheme proposals.

The LCWIP will be reviewed and updated periodically, particularly in response to significant changes in local circumstances such as the publication of new policies or strategies.

If you wish to view the full Woking Town LCWIP report or report annexes, please email surreytransportplan@surreycc.gov.uk requesting a copy.

The section of the Chertsey Road Phase 1 walking route between Woking railway station and Duke Street has recently been improved through the provision of a wider footway, resurfacing, traffic calming measures and the introduction of new plants to improve drainage in line with the LCWIP recommendations.