The two main archive catalogues are:

During World War II, the Territorial Battalions generally served together, 1/5th, 1/6th and 1/7th Battalions in 131st (Queen's) Infantry Brigade (44th (Home Counties) Division) and 2/5th, 2/6th and 2/7th Battalions in 35 Infantry Brigade (12th Division), later 169th Queen's Brigade of 56th London Division. As a result many records relating to these battalions cannot be assigned to an individual unit: these records have been grouped into a Territorial series (QRWS/8/-) which should be consulted alongside the series relating to each battalion.

Records of each regiment and its constituent battalions might include: standing orders, daily orders, nominal rolls, casualty returns and prisoner of war registers, headquarters files, digests of service, war diaries and other operational records, mess records, sports records, magazines and newsletters, programmes, menus and other ephemera, photographs, writings and research on the history of the unit and records of the regimental or battalion association. 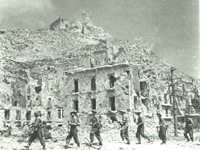 The archives also include personal papers of both regiments. They include service papers, private diaries, letters, photographs, and other collected papers relating to an individual's service and life, are organised alphabetically by surname.

The records of the Queen's Royal Surrey Regiment, created in 1959 and amalgamated into the newly formed Queen's Regiment in 1966, are held under the reference QRS. They chiefly include records of 1st Battalion and 3rd and 4th Battalions, merged in 1967 to form 6th (Territorial) Battalion, The Queen's Regiment. Also included are a small quantity of papers accumulated by individuals serving with the Regiment.

All catalogues are fully searchable online.

Detailed lists of the contents of all photograph albums held within the above five catalogues are available at Surrey History Centre. These lists name all those individuals identified by name in the photographs.

The official regimental journals are held in Surrey History Centre and brief details of contents can be found on our online catalogue (by selecting the Browse this Collection tab from the links below):

Also held are recruitment registers relating to 31st (East Surrey Regiment) Recruiting District, 1908-1933, and a single register relating to 2nd (Queen's Royal West Surrey Regiment) Recruiting District, 1917-1918, under the reference 2496. These registers have been transcribed and indexed and a CD published by Surrey History Trust

In addition the Surrey History Centre library holds the standard regimental histories and many other books and articles on the regiments and individual battalions and campaigns, together with published and unpublished memoirs of some of those who served.