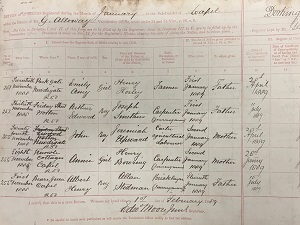 Until comparatively recently, smallpox was a real threat in the British Isles. Vaccination against smallpox was introduced widely in the beginning of the 19th century and made compulsory in 1853, with more stringent provisions being introduced in 1867, 1871 and 1874.

In order to ensure that all children were vaccinated, lists were compiled from the birth registration lists by the Vaccination Officer. The lists were organised within districts, and then divided into sub-districts. For example, Chertsey Registration District is subdivided into Chertsey, Chobham and Walton on Thames.

In one register there are a couple of pages entitled 'The Vaccination Acts, 1867 and 1871', and subtitled 'Notice of the Requirement of Vaccination'. There is a letter giving notice that the names child is required to be vaccinated at clinic before the child is three months old, in compliance with the Acts. Penalty for non-attendance was a fine of twenty shillings.

Most children were visited between one and two months old and vaccinated accordingly. An appointment could be postponed to a later date if and only if the child is not in a fit state to be vaccinated, in which case, once the child is restored to health, it was to attend the next Public Vaccination (clinic). This explains why a few children visit the clinic at greater than three months old, but most are one month or two months old.

Surviving vaccination lists generally give at least the following information:

Not all the entries are easy to read and if we have found alternative possible spellings they are given in [square brackets]. Where the child's first name was not completed, we have added girl or boy to the index. There are also occurrences of identical names, suggesting that the child attended for a second vaccination after a few months.

The registers contain a few handwritten letters concerning the children and these have been noted. One child had to be re-registered because the vaccination officer had mislaid the original registration details. Another child's vaccination was postponed because they were living in the north of England. Once settled in Walton the father brought the child in to be vaccinated.

Interesting entries in the registers include Margaret, daughter of His Royal Highness Prince Arthur, Duke of Connaught and Strathearn in the Chobham sub-district (SHC ref BG1/63/7) and the first register has an entry for a Florence Nightingale. However, this is not the famous one – she was born in Tuscany not Chertsey! However, it would be nice to think she was named after this famous nurse.

As always, indexing is a very subjective thing and, if you recognise any transcription errors, please let us know.