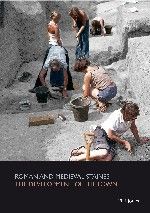 The development of the town
By Phil Jones

This monograph provides an overview of all archaeological work undertaken in the High Street of Staines, and six reports on five important sites excavated between 1977 and 1989.

The High Street had been an island where the Colne met the Thames, and Pontibus, the name of the small Roman town that developed there in the pre-Flavian period, refers to the bridges carrying the London to Silchester highway over the many streams of both rivers.

Refuse from the early settlement was dumped in road gravel quarries further east below the Elmsleigh Centre site, and provided large assemblages of pottery, animal bone and household items that are fully presented, but ribbon development soon extended along both sides of the High Street. These included shrines and important buildings with mosaic floors and walls with elaborately painted plaster, as well as shops and workshops that directly opened onto the highway.

Decline set in towards the end of the 2nd century, perhaps partly because of flooding, and later Roman occupation, though no less diffuse than before, became less intensive.

Because of the road, settlement probably continued into the Saxon period without a break, despite the main focus of activities shifting north to Binbury island, where stands the parish church. In the decayed old town a series of ditches dug along the southern river frontage may have assisted the defence of Stana from Vikings and others, and its new name may derive from the availability of Roman building debris.

Patronage by the Abbot of Westminster led to its re-founding as a town, with burgage plots, a new bridge built in the 12th century, and a market granted by 1218. Despite decline and contraction in the later 14th century, the importance of Staines as a hub of river and road traffic continued to ensure its prosperity until the present day.

Roman and medieval Staines: the development of the town
by Phil Jones, with Rob Poulton