Prehistoric, Roman and Saxon discoveries near Thorpe and Virginia Water

A wealth of archaeological information has been revealed by excavations in two areas, at St Ann's Heath School, Virginia Water and at Coldharbour Lane, Thorpe, both near to the Redbourne as it approaches the Thames. Both areas produced important evidence for Mesolithic activity, including purposefully dug pits. Similar Neolithic features were also identified, and at Coldharbour Lane the nature of the flintwork recovered suggested ritual activity of this period that preceded an Early Bronze Age ring ditch in the same location. The latter included two crouched inhumations in the ditch. There was plentiful evidence of Middle Bronze Age activity in the same general area, while at the school site a cremation burial of this period was also uncovered. 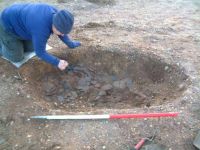 The Late Bronze Age/Early Iron Age was represented by a field system or enclosure at St Ann's Heath; the former presence of such a field system at Coldharbour, removed by truncation of the ditches, is suggested by the discovery of waterholes of this date. The Iron Age evidence at St Ann's Heath School is of particular significance with a settlement including rare evidence of iron smelting, as well as ditches, pits, four- and six-post structures, a curvilinear enclosure and a roundhouse ring gully. 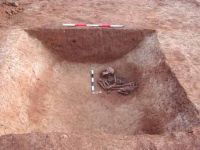 Significant later activity was only identified at Coldharbour Lane. A Roman field system was revealed, together with a corn drier. A number of pits also point to Saxon occupation, probably after the Early Saxon period, although its character is uncertain.

Prehistoric, Roman and Saxon discoveries near Thorpe and Virginia Water