Archaeological work at Waitrose, South St, Dorking between July and November 2013, in advance of proposed redevelopment of the site, showed activity at a number of periods. The earliest evidence, from both features and many flint artefacts, belongs to the Early Mesolithic period, with a radiocarbon date of 8625-8465 cal BC from hazelnut shells. Hunting parties came to retool and for other purposes in both the Middle and Late Mesolithic, indicating extensive exploitation of this part of the Surrey Greensand throughout the Mesolithic. 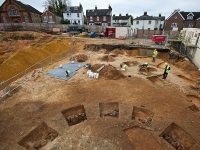 A Bronze Age ring-ditch probably defined a round barrow, and appears to have been deliberately closed during the Middle Bronze Age with the deposition of near complete ceramic vessels, ferruginous sandstone blocks ( perhaps originally part of a barrow structure) and scatterings of cremation deposits. A cremation, also dated to the Bronze Age, was found just to the west of the barrow. Less certain is the identification of ditches that may be elements of a larger Bronze Age field system, potentially of considerable importance as none have previously been identified on the Surrey Greensand.

The main medieval features were ditches, the earliest of which were probably used to create agricultural divisions, in the 11th or 12th century origin. They were superseded by a realignment of boundaries during an expansion of Dorking in the mid-late 13th century, when the excavated area became part of the backlands of properties fronting on to South St and West St. The post-medieval evidence comprised mainly pitting as the backlands of properties become more intensively utilised.