An excavation at Christ's College School, Guildford between April and June 2007, in advance of proposed redevelopment of the site, produced evidence of occupation in both the later Bronze Age and Roman periods, as well as of limited activity during the post-medieval and modern periods. The main Bronze Age features were ditches belonging to a field system or enclosure, together with three occupation or activity areas and other scattered features. Collectively this indicates both settlement activity and ritual deposition in the later Bronze Age period. 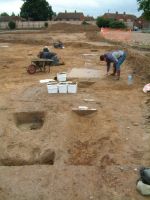 The Roman evidence was dominated by a north-south orientated system of gullies that seem to form a boundary ditch that may have separated a settlement area to the west (beyond the limit of excavation) from more open land to the east. A cluster of pits and/or waterholes lay immediately to the east of the boundary ditch and included multiple finds relating to domestic activity. Gullies to the south, that ran on a roughly east-west alignment, contained much less material, suggesting they were further away from the main settlement area, and may have formed a field boundary. All features date to the third century, suggesting the settlement and field system can only have been in use for a fairly short period of time. 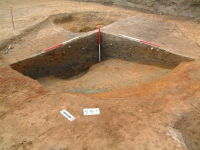 The archaeological work at Christ's College School clearly revealed material of archaeological importance for the local area and for the wider region. This publication sets out the detailed evidence for this, and discusses the material discovered within its wider context.