Archaeological discoveries in Ashford and Laleham 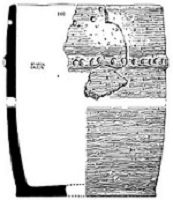 A wealth of archaeological information has been produced by the investigation of three sites that lay within a radius of 2.5km near to the river Ash, a tributary of the Thames. All produced some evidence of early prehistoric activity but that from Home Farm, Laleham, is the most substantial, with indications of Late Neolithic and Early Bronze Age occupation and cremation scattered across a wide area, suggesting communities whose agricultural methods, evidenced by animal bone and cereals, were still not those of settled farmers.

All three sites demonstrated the presence of later Bronze Age co-axial field systems with associated waterholes. At St Michael's Road, Ashford, there were only hints of associated occupation but at the Spelthorne Fire station, Ashford, there were indications of a post-built roundhouse and other features. Home Farm, Laleham, revealed a number of occupation locations, one with a clearly defined, post-built round house and others with many postholes that must belong to similar structures. Cremations, mostly un-urned, were identified in locations separate from, but near to, occupation areas and close to field boundaries. Charred grain showed that cereal crops were an important part of the economy. Finds of particular note are many pieces of perforated clay tablets.

The Spelthorne Fire station site revealed an important Middle-Late Iron Age site, with a trackway to the west of a farmstead that consisted of a principal hut, an ancillary hut, and a working area. Struck flint provides one of the best indications of its use extending well into the Middle Iron Age