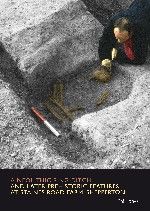 A Neolithic ring ditch on a lower Thames terrace west of London was fully excavated in 1989. It had a short causeway gap to the north-east and was segmented through its northern and western lengths. Soon after being dug, in the middle of the 4th millennium BC, it was filled or lined with white clay. If filled, the clay might then have been dug out, while respecting the shape of the original ditch. A subsequent crouched burial in the ditch terminal by the causeway was of similar date, and other placements along the ditch base include antler picks, the remains of a dog/wolf and one or more large pieces of Peterborough ware. These and the remains of the white clay were buried by a soil fill containing large quantities of struck flint, animal bone, and plain and decorated pottery sherds suggestive of a domestic site. Similar radiocarbon dates were obtained for this sealing fill except for one bone belonging to the first half of the 4th millennium BC.

A Neolithic occupation deposit adjacent to the ring ditch was covered by a burnt mound layer dated to the middle of the 3rd millennium BC, which also filled and sealed a probable boiling pit and its hearth, as well as another pit. A nearby large pit was dug around the beginning of the 2nd millennium BC, and a cluster of probable tree-throw hollows contained pottery belonging to the first half of the 1st millennium BC.

Between the above and the River Ash was a pit row avenue sealed by an alluvial clay, which might have been contemporary with the henge, and further west perhaps the same river clay had buried two later prehistoric field ditches.

This volume is a full report on the work, and includes detailed reports on all classes of finds, including worked flint, pottery, animal and human bone, as well as studies of macroscopic plant and invertebrate remains, palynology, and radiocarbon dates.