Some cycle facilities create a dedicated space for cycling, but not all. On quiet, lower-speed streets it is usual for a cycle facility to be introduced by making the existing carriageway a comfortable place for people of all cycling abilities to ride, sharing with other vehicles. In some locations, particularly low footfall areas away from buildings, a path shared with pedestrians (and sometimes horse riders) can make a comfortable cycle facility too.

Cycle facility design guidance in England was amended by the government in 2020, with the release of Local Transport Note 1/20: Cycle Infrastructure Design. The cycle facility types shown below are illustrative examples taken from the new guidance. When cycle facilities are installed in Surrey, they may adapt these example facilities. The guidance does not replace Surrey County Council's responsibility as Local Transport/Highway Authority to determine the most suitable arrangements for cycling on its network, which will take into account local circumstances, available funding and so forth.

A 'cycle track' is the technical name for a dedicated space for cycling along a road, distinct from both the carriageway and footway. Cycle tracks should be designed such that it is easy to recognise them as a space intended for cycling rather than walking, driving or parking. For instance, they can be built at a different level to the carriageway and footway to introduce a height difference, utilise a different surfacing material or be separated from other traffic with a kerb, verge or similar. 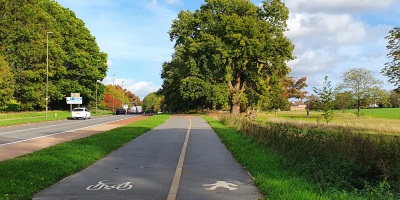 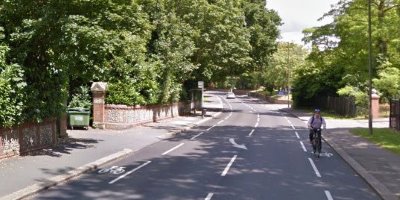 A 'greenway' is a name often given to a cycle facility that is away from the road altogether. Greenways can be cycle tracks but are often bridleways or byways with a surface suitable for cycling, or wide paths that are technically footpaths and cycle tracks adjacent to one another.

On quiet streets and lanes, where traffic flows and speeds are both low, it is normally comfortable for cycles to share the carriageway with other vehicles. This can be supported with traffic calming measures as appropriate.

In some locations, cycling is expressly permitted on a footway, supported by signage showing where this is the case. (Cycling is not normally permitted on a footway.) The 2020 update to government guidance recommends that new shared footways should generally be avoided, as they are only practical where both footfall and cycling levels are expected to remain unusually low which is counter to the objective of investing in growing rates of walking and cycling.

In addition to creating cycle facilities for travelling along, cycling needs other types of supporting infrastructure too, such as: