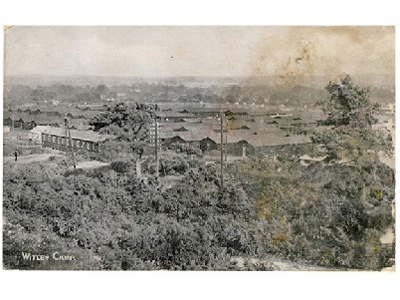 Excavations throughout the summer of 2015 took place at a forested region South of Guildford known as 'Witley North Camp'. This project was generously funded by the Community Covenant Fund and supported by Natural England, Godalming Museum and Combat Stress, enabling archaeological fieldwork and surveying to take place.

Witley Camp was as an extensive military base during World War One and Two. Today, all that remains is dense woodland. By the end of both World Wars, the camp was largely deconstructed and any salvageable materials (including building foundations) were stripped away and used elsewhere. Many of the First World War wooden cabins were flat packed and transported away from the site. Despite this, thanks to the hard-work and enthusiasm of all the volunteers and SCAU staff, many interesting and informative finds and features were unearthed.

After months of careful planning and research, four weeks of excavating at Witley Camp commenced across the summer and autumn. Surrey County Archaeological Unit was supported by their project partners: Natural England, Combat Stress, Godalming Museum and Thursley History Society who helped to promote the project and support its funding. 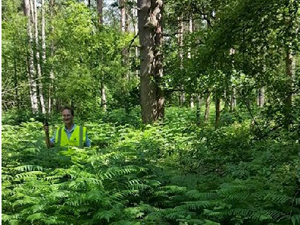 Before any trenches were dug, the volunteers conducted a site survey. This involved a team of volunteers adventuring into the woods with a GPS and recording any significant features.

The team of volunteers found evidence of structures as there were huge chunks of concrete atop the forest floor. By plotting these discoveries on the GPS, they revealed possible future areas of excavations which may prove archaeologically significant.

After clearing away the thick bracken that swamped many of our trench locations, excavations commenced! In total, during the four weeks, 25 trenches were opened and most of them contained an array of archaeological finds and features. The vast woodland was covered in bracken which was several feet high and often proved a nuisance whilst surveying. We regularly fought our way through it, just to get to the next clearing! In total, we had 75 volunteers attend the excavations at Witley North Camp. 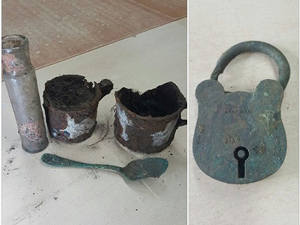 A large number of interesting finds were unearthed some of which included: glass bottles, dummy bullets, badges, cutlery, Bovril jars, lots of building material and even a harmonica! Additionally, a number of important features were also discovered which revealed more about the nature of the military base including roads, pipes, backfilled building materials and likely signs of foundations of buildings. These helped solidify our knowledge of the camp and evaluate how accurate the contemporary maps were. 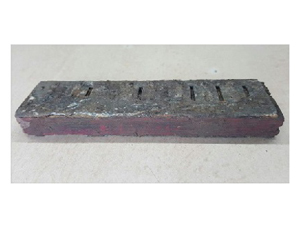 It was at Witley where the famous World War One poet Wilfred Owen penned a prelude to his most prominent poem "Anthem for Doomed Youth". Owen arrived at Witley North Camp in June 1916 and spent several months training there, before departing to France to fight in the war. Sadly, he died just a week before the war ended.

Image 2: Blending in! Our volunteer John wades through the thick bracken in order to get to the next clearing.

Image 3: Spoon, two cups and a jar excavated and awaiting a clean.

Image 4: The harmonica that was unearthed.