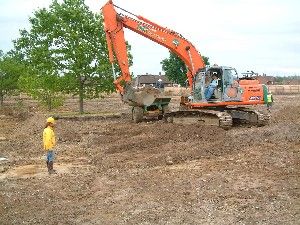 In January 2007 an evaluation by Surrey County Archaeological Unit staff took place at Christ's College School, Guildford. The fieldwork took place ahead of development on the site, which consisted of the construction of new modern school buildings, as well as a completely new school for children with learning difficulties (Pond Meadow School).

The site was located on a gentle slope, on the cusp of the London Clay and Lower River Terrace Gravels, to the north of the river Wey. No previous archaeological exploration had taken place on the site, but a late 1st or early 2nd century Roman ditch and possible pit were identified at Northmead School, 350m west of the Christ's College site, suggesting the possibility of Roman remains in the area.

Thirty one trial trenches were excavated across the proposed development area, revealing three key areas in which archaeological remains survived. Area A contained an in-situ spread of burnt flint, sherds of pottery, and 182 struck flints all dating to the later Bronze Age. To the east of the site, in Area B, a number of pits and ditch segments were excavated which all suggested later Bronze Age settlement activity, and in Area C a series of Roman pits and ditches were revealed.

Following the evaluation, it was decided that full open area excavation should take place across areas B and C due to the intensive construction proposed in these areas. In contrast, Area A was preserved in-situ and covered by a protective gravel capping, as it was to undergo only minor landscaping. The excavation took place in May and June 2007, one of the wettest summers in living memory! Despite the testing weather conditions, much of the proposal area was carefully machine stripped and a record of the archaeology within the top and subsoil made, which included a further later Bronze Age flint scatter.

Stripping of Area B revealed several large ditches containing later Bronze Age flintwork, that seemed to form part of either a field system or enclosure. Clusters of pits and post holes contained similar dating evidence, which, combined with the two flint scatters found in Area A and Area B, suggests significant later Bronze Age settlement activity, previously unidentified in the local area. Two small pits to the south of the Area B excavation area appeared to be earlier in date than the other features, as one contained Middle Bronze Age pottery. The other contained a collection of flint artefacts, in the form of five similar waste flakes and a core that may be placed deposits, indicating the pits had a ritual or alternative social function.

The flintwork from the Christ's College site, includes a total of 628 pieces of struck flint, including cores, debitage, scrapers, piercers, notched, edge modified and combination tools. With the exception of a small quantity of flakes and cores, most of the collection is chronologically cohesive, and typical of later Bronze Age flint technology. Such collections are rare, and few analyses have been undertaken, so the lithics hold great research potential.

After the machine stripping in Area C, a series of Roman ditches dated by pottery to the 3rd century, were discovered running on both north-south and east-west axes, seemingly creating a right angled field boundary or enclosure. The stratigraphic relationships of the ditches suggested it was unlikely that all were contemporary, so some may be re-cuts of the same boundary, showing different phases of activity during the 3rd century. Within the boundaries of the ditches, a series of pits and a large waterhole produced a substantial amount of Roman pottery, as well as fragments of Lower Greensand quernstone, triangular clay loomweights, and large flint nodules, tegula, imbrex, floor, and combed box flue tile, that indicate a building in the vicinity.

Overall, nearly 1000 Roman pottery sherds were retrieved, all of which seemed to be of 3rd century types, but with the proviso that some could belong to the later 2nd or earlier 4th centuries. The majority of sherds were Alice Holt, Farnham grey/brown sandy fabrics, but fine wares, mortaria and an amphora sherd were also represented. All the vessel forms were of the type associated with domestic activities, and this fact combined with the type of features investigated, suggested the excavation in Area C uncovered the periphery of a local 3rd century settlement, that may have had its central focus to the west of the area examined.

The archaeological discoveries made at Christ's College School, are of great significance for both the local area and wider region. The information recovered will most certainly enhance knowledge of regional settlement patterns in the Roman and Bronze Age periods. An assessment report for the excavation has recently been completed, and work will begin on the production of a full publication in 2009.