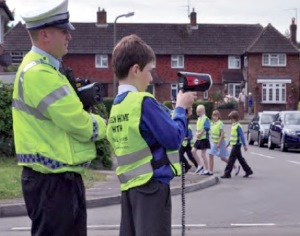 School Speed Watch is a community initiative set up to reduce high speeds in rural and urban areas around schools. It involves a group of pupils and a Surrey Police Casualty Reduction Officer checking speeds of motorists using a radar gun. It enables the school's community to work together to achieve a safer environment for them to live in. It also helps to build a positive relationship between pupils, staff, professional bodies and the community.

How does it work?

A suitable location for the Speed Watch is decided by the Surrey County Council Safer Travel Team and the Surrey Police Casualty Reduction Officer, either outside or near the school. The children are briefed by the police and divided into groups, with a ratio of three children per adult. One group is accompanied by a police officer and together checks motorist's speed using a radar gun. If a motorist is speeding the police officer will pull them over and the driver is asked if they are willing to take part in the project. If they agree, the second group of children will ask the motorist a number predetermined of questions to raise their awareness of road safety. Alternatively the driver can be issued with the usual penalty.