A celebration of achievement at the Supported Learning Awards Ceremony 2018

Deputy Principal Lisa Woodward welcomed learners and expressed her pride and respect for the learners who worked hard to improve their skills in order to lead happier and more independent lives. Learners have gained accredited qualifications which have led to employment in some cases, and increased self-confidence in others. 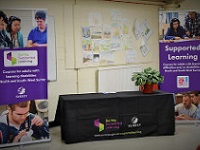 After the ceremony, guests and staff gathered for an afternoon tea reception, where learners talked about their goals and aspirations for their future.

We once again congratulate all of our learners on their outstanding achievements.

Insight into our award winners 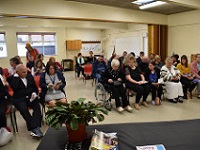 Amongst the guests attending the Supported Learning Awards Ceremony was learner Rosemary Ellis who was accompanied by her mother. Rosemary achieved the Laser Entry Level 3 qualification Award for Learning, Employability and Progression in Cookery. Rosemary was incredibly proud and explained that she has been attending cookery classes at the Molesey Centre for seven years. She said "The Molesey Centre is my favourite place; it is such a friendly environment." Rosemary added that before attending the courses, she was not able to cook but "I'm now cooking for mum all of the time, as I am her carer. I also cook cakes for family parties too."

Rosemary showed gratitude when speaking of her Tutor. She said "The Tutor has helped me so much, particularly when I've felt down during the course – she picked me up." Rosemary follows the accessible recipes the Tutor provides at home, finding them straightforward to follow. In turn, the Tutor Renee Cooper said, "It's been a pleasure teaching Rosemary; she is always up for a challenge and goes that extra mile to complete tasks."

Finally, Rosemary explained that she is going to take a year out from attending courses and is looking forward to returning to learning next year. 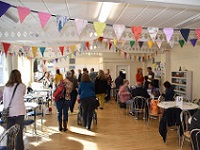 Jack is progressing well and shared that he is now cooking more: "We have two cooking days at home. I now cook for my housemates on a Thursday. I follow the recipes the Tutor gives me; one of my favourite recipes is Spanish Chicken Chorizo." Jack completed the Laser Entry Level 3 Award in Independent Living (Shop and Cook). He has gained improved confidence and self-belief. As part of his self-development, Jack is attending a Reading, Writing and Media course this year. He is also volunteering on a Wednesday for 'Boz Fruit and Veg' in Horsell, a local fruit and vegetable retailer, which he really enjoys.

Jack's Tutor Renee Cooper commended Jack, and said: "Jack brings a great deal of fun to the class; he has a great sense of humour and is always up for the challenges I set him."

Great to see Jack move ahead with his life!

At the ceremony awards we spoke to learner Hayley Barford, and her mother, and grandmother. Hayley's mother told me that coming to the Camberley Cookery classes has given Hayley the confidence and skills to cook healthy dishes from scratch at home, and that Hayley can use the recipes from her Tutor to cook dishes at home, or for her family when they visit.

Hayley said: "Coming to the classes means that I am much better now at following instructions and following things through. I have practiced lots of different skills with my hands: peeling, cutting, and making breadcrumbs for crumble topping."

Hayley explained that at her home they decide as a group what they are all going to eat each week and sometimes Hayley cooks for the other people she lives with using recipes from her class.

Hayley's Tutor Helen Wood is very proud of Hayley's development. Helen said: "over the past two years, Hayley has progressively developed competence skills, bringing a cheery disposition to the class, and she is always willing to help others."

Emma was attending the awards ceremony with her dad, Nick. I spoke to Emma after she received her certificate at the awards ceremony. Emma said she had worked really hard to get the evidence together for her award, but working with the Tutor Renee in Shop and Cook made all the hard work seem fun. Emma said: "It's the best thing because I get to meet up with my friends, learn how to make shopping lists, go out with the support of my friends and the tutor to buy the ingredients, and then come back to cook and eat a lovely lunch."

"Since coming to my classes, I can decide what to cook for my dad. We write the shopping list, following the recipe, and then go to the shops to buy the ingredients I need. The other day I cooked him macaroni cheese and he said it was the best he had ever tasted!"

Emma's dad said that because of the classes Emma attends with Surrey Supported Learning, she is far more confident in the kitchen. Receiving the award is brilliant because now everyone can see how far she has come and what she is capable of.

Michael was attending the Awards Ceremony with Mark, his key support at home.

I spoke to Michael after he received his certificate. Michael was very keen to tell me how coming to his classes has really helped him with his money skills and independent bus travel. He says that the buses are normally very annoying, but he's learning to cope with their uncertainty and enjoys the independence. Michael appreciates all the support he gets from home and the team at Surrey Supported Learning when he gets cross with the buses being late.

Mark said that, at home, Michael has really developed the skills he has learnt in class. He has learnt a strong method which adds to his consistent cooking ability.

Michael says he likes cooking home-made burgers the best and his long term goal is to star in Ready, Steady, Cook! Keep working hard Michael, and you never know where it will lead.

Callum was attending the awards ceremony with his dad. I spoke to Callum after he received his Laser Entry 3 qualification. Callum said that coming to his classes with Surrey Supported Learning makes him feel good. He said he likes being able to go shopping and pay for the ingredients for the class with his Tutor's support. His favourite dish is quiche and he can cook it at home with support.

Callum's dad proudly told us that Callum had recently got a job at Sainsbury's where the food hygiene knowledge learnt at his Cookery class will come in really handy. Surrey Adult Learning would like to congratulate Callum on his new job!