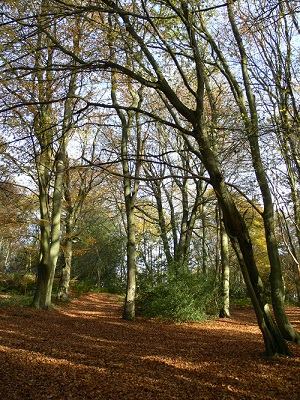 Located in the east of Surrey, Staffhurst Wood is a beautiful woodland site with a small area of grassland and a pond. The deciduous woodland is made up of species such as oak, ash and beech amongst others and some of it is designated ancient woodland. There are a small number of veteran trees on the site that survived clear felling for timber in the 1930s and use of the woods as an ammunition dump and location for troops stationed nearby in World War II.

Staffhurst Wood is home to 200 plant species such as common spotted orchids and wood anemones. For the last 70 years the wood has been managed to contribute to its biodiversity of species. The pond is home to great-crested newts and other amphibians.

Please take care of our countryside and open spaces. Take note of the Countryside Code.

Staffhurst Wood is owned and managed by Surrey County Council for public access including site management and litter bins, car park and visitor services such as walking trails. For information about conservation and the wildlife to look out for please visit Surrey Wildlife Trust

There is an easy self-guided route at Staffhurst Wood which is being upgraded and re-waymarked. Follow the signs from the car park.

There are other East Surrey self-guided routes nearby to discover.

Send us any photos you take that you're happy to share on social media, tag @ExploreSurreyUK.

If you need to get in touch to tell us about any issues at Staffhurst Wood:

Environmental designations of Staffhurst Wood and what they mean

Ancient Woodlands are areas of persistent undisturbed woodland that have survived since 1600 in England, they are home to many species of plants, fungi and insects so of great benefit to biodiversity.

A Site of Special Scientific Interest (SSSI) is a formal conservation designation. Usually, it describes an area that's of particular interest to science due to the rare species of fauna or flora it contains - or even important geological or physiological features that may lie in its boundaries.

Local Nature Reserves (LNR) are special areas designated by Natural England as being a natural resource contributing to biodiversity. They must be looked after by the local authority in whose area they are located.

An Area of Great Landscape Value (AGLV) is an area of land in England which is considered to be of high landscape quality with strong distinctive characteristics which make them particularly sensitive to development. The designation was established under the Town and Country Planning Act 1947. Staffhurst Wood is located near the Surrey Hills AONB.