October is Black History Month! Surrey Heritage continues to mark this annual international awareness campaign and ensures that Black History is present all year round through online guides, reading lists, and library and archive collections. Find out more on the Exploring Surrey's Past website.

Colonial slavery shaped modern Britain and its legacies remain today. This month we look at the fascinating and revealing records of the Slave Compensation Commission, which can often make for uncomfortable reading.

The trade in enslaved people from Africa to the British colonies was banned in 1807, but it was not until 1833 that Parliament finally abolished slavery in the British Caribbean, Mauritius and the Cape. To combat illegal transportation following the 1807 act many of the British Colonies began keeping registers of enslaved people who had been 'lawfully enslaved'. In 1819 the Office for the Registry of Colonial Slaves was established in London, and copies of the slave registers kept by the colonies were sent to this office. Registration generally occurred once every three years and the registers continue through to 1834 when slavery ended (although freedom came at a price: in place of slavery a system of bonded labour was introduced). But what of the slave owners? They were granted £20 million in compensation (paid for by British taxpayers), for their loss of 'assets'.

The compensation was administered by the Office of Registry of Colonial Slaves and Slave Compensation Commission, appointed by Parliament to assess claims. Each claim was checked in the relevant colonies and if confirmed, the owner received compensation. The amounts were fixed according to the classification of each enslaved person (gender, age, type of work, and level of skill) and the level of productivity, and therefore profitability, of the different islands and territories.

The 663 registers of claims are held at The National Archives, Kew (TNA ref T71). They have now been digitised and indexed and can be viewed on the Ancestry website. They cover the years 1812 to 1851, are indexed by name of the owner or plantation and include the proceedings of the assistant commissioners sent to the colonies. They provide a unique snapshot of slave owners in Britain, as well as the Caribbean, Mauritius and the Cape and also record the men, women and children the owners claimed as their 'property', along with the values assigned to them.

A project to create a database of the information in the compensation records has been created by the Centre for the Study of the Legacies of British Slave-ownership at University College London. The database has identified thousands of estates and owners, back to 1763, and has led to a wealth of research, with accompanying maps, sources list, research guidance, blogs and newsletters. 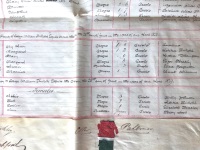 Many Surrey slave owners feature in the database. A search using 'Surrey' as the residence of an owner, reveals 275 individuals within the old county boundaries. These include the Rt Hon Henry Goulburn, MP (1784-1856) of Betchworth; Edward Long (1734-1813) of Coombe House, Kingston, author of 'The History of Jamaica' (1774); James Scarlett MP (1769-1844), barrister, who was made 1st Baron Abinger in 1835; John Ivat Briscoe (1791-1870), lord of the manor of Epsom; the Williams and Lambert families of Thames Ditton; and the politician Charles Nicholas Pallmer of Norbiton Place (1771-1848). Some former Surrey plantation owners, such as the Godwin Austen family of Shalford and the More-Molyneux family of Loseley Park, had shed their enslaved people by the time the Commission was established, and so do not appear. Surrey History Centre holds records for all these individuals and their families, ranging from lists of enslaved people owned, to records of managing the plantations, or the transfer of estates through marriage settlements and wills.

Surrey's slave owners not only included men but also a surprising number of women, just under a fifth, in fact. Some were married, others were spinsters or widows, not all were landed and upper class, and some had simply inherited their 'asset' through the death of a husband, relative, or as part of a marriage settlement. The database reveals that the numbers of enslaved people owned by these women ranged from one to hundreds, with the compensation awarded being a few pounds or several thousand.

The database helps to make visible the political, cultural, physical and commercial legacies of slave ownership across the globe. The houses built in part from the wealth generated by plantations still stand. For example Thomas Lord Onslow (1679-1740), MP for Gatton, Chichester, Bletchingley and Surrey, married the Jamaican heiress, Elizabeth Knight, in 1708, and drew on her fortune to build Clandon Park. As MPs, the financial interests of such men were a factor in political decisions affecting the longevity of slavery.

For the full story of Surrey and the slave compensation registers, see the Exploring Surrey's Past website.

Valuation of 'sundry slaves' Margaret Williams Samson and her seven children, the property of Henry Goulburn's Amity Hall Estate, at Vere, Jamaica, 16 May 1816. The family are valued at £800 (SHC ref 304/J/Box7/6/1).

Extract from a list of enslaved people's names, forming part of the deeds for the conveyance of property in Jamaica, 17 April 1832, by George William Ricketts to Francis Love Beckford Sr. and Charles Nicholas Pallmer. This chilling document records the names, ages, sexes and colours of enslaved people on the New Canaan Plantation and Sugar Works (belonging to the Ricketts family), Co. Cornwall, Jamaica, between 1817 and 1829 (SHC ref G111/44/BOX1-2).