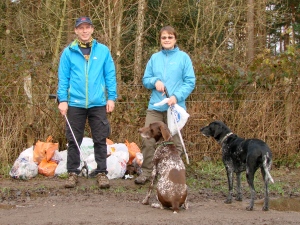 Tell us more about what you do

"My husband and I pick up litter from Old Dean and Barossa Commons. Each morning before I go to work, I walk the dogs on the common and will pick up any litter that I find. Later in the day Kris, who works night shifts, will collect rubbish from another part of the common. We've been doing this for the last 18 years and now it's a habit – we automatically take a litter picker and a bag with us."

What motivated you to start doing this?

"We're both keen dog walkers and frequently our dogs were getting injured by glass or metal which people had left on the common. We couldn't afford to keep taking the dogs to the vet, so I decided I had to do something about it. I started taking a bag with me on each walk to pick up litter and soon after Kris started doing it too. We believe if people don't see any litter, then they will feel less inclined to leave any behind themselves."

Do other people notice the difference you're making in the community?

"The common is Ministry of Defence land and a few years ago the Army Ranger saw me collecting the rubbish. We now have an arrangement whereby the Army collect the rubbish we've picked up and dispose of it for us.

Other members of the community appreciate our efforts as well. I was recently awarded a British Empire Medal for Services to the Community, having been nominated by some local people and a retired army officer who all use the common. I was astonished that people are so appreciative of what Kris and I do."

What would you say to others who want to help?

"It makes you feel good doing your bit to help the environment. It's important to respect the landowner in whatever you do, and you don't have to do it on your own; there are lots of local conservation and anti-littering groups such as ZILCH, which anyone can join. So if you're passionate about something try to find out what you can do to help – if everyone did his or her little bit then we would live in a more pleasant environment."

Valerie will be participating in Clean for the Queen, a national campaign which takes place from 4 to 6 March. The campaign is aimed at encouraging individuals, volunteer groups, local businesses, schools and other community groups to get involved in clearing litter in their communities, in the lead up to the Queen's 90th birthday celebrations this June.

To speak to someone about volunteering where you live, get in touch with your local Volunteer Centre.

For more inspiration, look at our volunteering ideas.