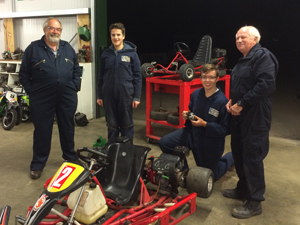 Chris Dymond is retired and volunteers at the GASP Motor Project

We spoke to Chris about what makes it such a rewarding place to volunteer, and heard from some of the young people who the project has helped.

Tell us a bit about your volunteering role

"I volunteer at the GASP workshop in Albury, near Guildford, on a Monday evening, normally working with four to six young people. The idea is to teach them the basics of car mechanics and engineering, how the different vehicles are put together and why they are put together that way. We also teach them how to use different tools and about workshop safety. Recently we worked with the young people to build two Green power electric kit cars ¬– as part of our drive to introduce them to new technology – which they then raced at the Goodwood and Dunsfold tracks. This gave them the chance to see how their vehicles performed against other people's and how they could be improved."

How did you first get involved?

"I started volunteering at GASP in 2009. I had retired early from my job as a satellite telecoms engineer and after three months I thought I had to do something. My wife's friend knew about GASP and suggested I come down to see what I could do here. Since retiring I've also started volunteering as a signalling engineer on the Bluebell Railway and as a volunteer teacher."

What do you get out of coming to GASP?

"The main thing is seeing the young people enjoying themselves while they learn new skills – and their progression. It's not all about mechanics and how to use tools, but also learning to work together and trust each other. Initially that can be challenging but after a while they develop into a really good team. We've seen some strong friendships form here, amongst young people from all sorts of backgrounds. Some of them have also gone on to undertake work experience or apprenticeships in engineering or car mechanics, or to start jobs at organisations like Stanhope-Seta in Chertsey. It makes you realise it's worth doing."

Would you have any advice for anyone interested in volunteering at GASP?

"You need to enjoy working with young people and to have an interest in engineering and/or vehicles. The charity is always keen to recruit more volunteers – of all ages, those in employment and those who are retired – and if someone wants to give it a try, I'd encourage them to contact the GASP Chief Executive, Henry Curwen, and arrange to attend a few sessions as a taster. There are evening sessions on a Monday, Wednesday and Thursday from 7pm – 9pm so it's easy to come along to find out what it's all about."

What do the young people think about the volunteers?

James and Josh were taught by Chris and other volunteers at GASP. James is now working as an Apprentice Instrument Assembly Technician at Stanhope-Seta in Chertsey and Josh is a motor vehicle technician at Peaslake Garage outside Guildford, working towards a Level 3 Apprenticeship.

James says "the knowledge given to me by the volunteers at GASP has been a great foundation for working in a practical environment."

"I learnt loads", adds Josh. "The volunteers are really friendly and they help you to learn. It made going into a mechanical workplace ten times easier."