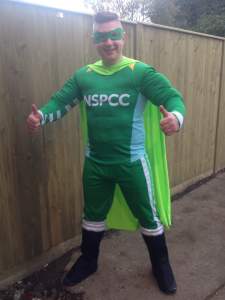 Aaron volunteers as a fundraiser for the NSPCC

Can you tell us more about the volunteering you do?

"I fundraise for the NSPCC's ChildLine service through the Liam Charity tribute fund. Each year I take on a personal fundraising challenge - which this year is the London Marathon for which ChildLine is the chosen charity. This is not my first individual event, I have also done the Virgin London Triathlon, the Prudential RideLondon-Surrey 100 and cycled London to Brighton as well as the London Marathon previously. I also organise many other fundraising events such as darts evenings and comedy nights, spinathon and once a year I host my flagship event The Liam Charity family fun day at Carshalton Athletic which raises several thousand pounds for the charity.

It's not just about raising money but also about building awareness. I have worked and continue to work with youth groups and schools to teach them about the support available from the NSPCC and the importance of seeking help in a time of need."

What does the NSPCC do?

"The NSPCC is the National Society for the Prevention of Cruelty to Children. The NSPCC's mission is to end child abuse in the UK and they provide support to children who are being abused or at risk of being abused. The NSPCC is best known for its Childline Service which is a 24-hour helpline run by volunteers to give children or anyone worried about a child a safe place to talk – over the past 30 years they have counselled over 4 million children."

What motivated you to start fundraising for the NSPCC?

"My brother Liam took his own life in 2010. Liam was an amazing person and it was a really difficult time for everyone who knew him. I wanted Liam to be remembered in a positive way so I decided to do something. Due to the nature of Liam's death I wanted to do something that could help children in his position and the NSPCC's Childline service stood out. It provides young people like Liam somewhere to turn when they feel they have no-one else to talk to and I hope Liam's legacy will help others in a similar situation. Initially I set out to raise £10,000 but so many other people have got on board that we've now increased the target to £100,000."

What do you find most rewarding about the volunteering you do?

"Fundraising can be hard work but it's really rewarding because I know that every moment I put in has the potential to help someone else. I've met some amazing people and seen how their lives have changed because of the support of the NSPCC. Lots of other people have got on board too and I really enjoy seeing how, through fundraising, people can push themselves and achieve more than they ever thought was possible.

Through my voluntary fundraising I've become even more passionate about supporting the NSPCC and I now work for them as a Community Fundraiser, although I also still do my own personal fundraising. Doing something to help a charity is a feeling that you won't get from doing anything else."

Do you have any advice for anyone who wants to get involved in fundraising?

"It's really important to know where the money is going so you can tell people how their money will make a difference. Try to reach out to as many people as possible as well so you don't always ask the same people for money. And don't worry about how much money you raise – no amount of money is too small."